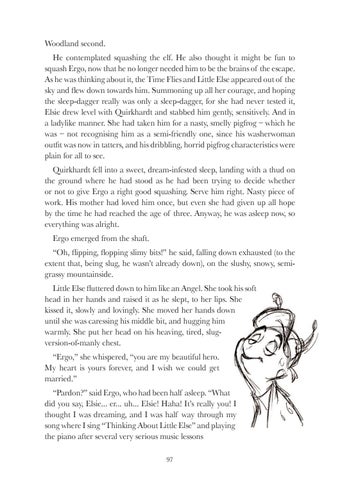 Woodland second. He contemplated squashing the elf. He also thought it might be fun to squash Ergo, now that he no longer needed him to be the brains of the escape. As he was thinking about it, the Time Flies and Little Else appeared out of the sky and flew down towards him. Summoning up all her courage, and hoping the sleep-dagger really was only a sleep-dagger, for she had never tested it, Elsie drew level with Quirkhardt and stabbed him gently, sensitively. And in a ladylike manner. She had taken him for a nasty, smelly pigfrog – which he was – not recognising him as a semi-friendly one, since his washerwoman outfit was now in tatters, and his dribbling, horrid pigfrog characteristics were plain for all to see. Quirkhardt fell into a sweet, dream-infested sleep, landing with a thud on the ground where he had stood as he had been trying to decide whether or not to give Ergo a right good squashing. Serve him right. Nasty piece of work. His mother had loved him once, but even she had given up all hope by the time he had reached the age of three. Anyway, he was asleep now, so everything was alright. Ergo emerged from the shaft. “Oh, flipping, flopping slimy bits!” he said, falling down exhausted (to the extent that, being slug, he wasn’t already down), on the slushy, snowy, semigrassy mountainside. Little Else fluttered down to him like an Angel. She took his soft head in her hands and raised it as he slept, to her lips. She kissed it, slowly and lovingly. She moved her hands down until she was caressing his middle bit, and hugging him warmly. She put her head on his heaving, tired, slugversion-of-manly chest. “Ergo,” she whispered, “you are my beautiful hero. My heart is yours forever, and I wish we could get married.” “Pardon?” said Ergo, who had been half asleep. “What did you say, Elsie... er... uh... Elsie! Haha! It’s really you! I thought I was dreaming, and I was half way through my song where I sing “Thinking About Little Else” and playing the piano after several very serious music lessons 97