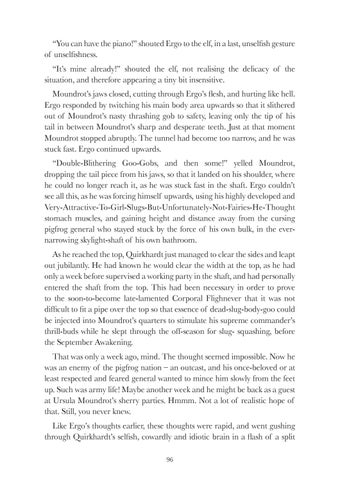 “You can have the piano!” shouted Ergo to the elf, in a last, unselfish gesture of unselfishness. “It’s mine already!” shouted the elf, not realising the delicacy of the situation, and therefore appearing a tiny bit insensitive. Moundrot’s jaws closed, cutting through Ergo’s flesh, and hurting like hell. Ergo responded by twitching his main body area upwards so that it slithered out of Moundrot’s nasty thrashing gob to safety, leaving only the tip of his tail in between Moundrot’s sharp and desperate teeth. Just at that moment Moundrot stopped abruptly. The tunnel had become too narrow, and he was stuck fast. Ergo continued upwards. “Double-Blithering Goo-Gobs, and then some!” yelled Moundrot, dropping the tail piece from his jaws, so that it landed on his shoulder, where he could no longer reach it, as he was stuck fast in the shaft. Ergo couldn’t see all this, as he was forcing himself upwards, using his highly developed and Very-Attractive-To-Girl-Slugs-But-Unfortunately-Not-Fairies-He-Thought stomach muscles, and gaining height and distance away from the cursing pigfrog general who stayed stuck by the force of his own bulk, in the evernarrowing skylight-shaft of his own bathroom. As he reached the top, Quirkhardt just managed to clear the sides and leapt out jubilantly. He had known he would clear the width at the top, as he had only a week before supervised a working party in the shaft, and had personally entered the shaft from the top. This had been necessary in order to prove to the soon-to-become late-lamented Corporal Flighnever that it was not difficult to fit a pipe over the top so that essence of dead-slug-body-goo could be injected into Moundrot’s quarters to stimulate his supreme commander’s thrill-buds while he slept through the off-season for slug- squashing, before the September Awakening. That was only a week ago, mind. The thought seemed impossible. Now he was an enemy of the pigfrog nation – an outcast, and his once-beloved or at least respected and feared general wanted to mince him slowly from the feet up. Such was army life! Maybe another week and he might be back as a guest at Ursula Moundrot’s sherry parties. Hmmm. Not a lot of realistic hope of that. Still, you never knew. Like Ergo’s thoughts earlier, these thoughts were rapid, and went gushing through Quirkhardt’s selfish, cowardly and idiotic brain in a flash of a split 96