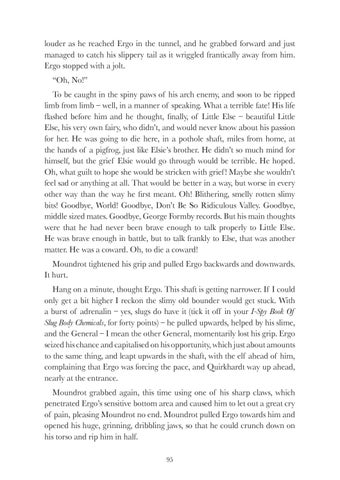 louder as he reached Ergo in the tunnel, and he grabbed forward and just managed to catch his slippery tail as it wriggled frantically away from him. Ergo stopped with a jolt. “Oh, No!” To be caught in the spiny paws of his arch enemy, and soon to be ripped limb from limb – well, in a manner of speaking. What a terrible fate! His life flashed before him and he thought, finally, of Little Else – beautiful Little Else, his very own fairy, who didn’t, and would never know about his passion for her. He was going to die here, in a pothole shaft, miles from home, at the hands of a pigfrog, just like Elsie’s brother. He didn’t so much mind for himself, but the grief Elsie would go through would be terrible. He hoped. Oh, what guilt to hope she would be stricken with grief ! Maybe she wouldn’t feel sad or anything at all. That would be better in a way, but worse in every other way than the way he first meant. Oh! Blithering, smelly rotten slimy bits! Goodbye, World! Goodbye, Don’t Be So Ridiculous Valley. Goodbye, middle sized mates. Goodbye, George Formby records. But his main thoughts were that he had never been brave enough to talk properly to Little Else. He was brave enough in battle, but to talk frankly to Else, that was another matter. He was a coward. Oh, to die a coward! Moundrot tightened his grip and pulled Ergo backwards and downwards. It hurt. Hang on a minute, thought Ergo. This shaft is getting narrower. If I could only get a bit higher I reckon the slimy old bounder would get stuck. With a burst of adrenalin – yes, slugs do have it (tick it off in your I-Spy Book Of Slug Body Chemicals, for forty points) – he pulled upwards, helped by his slime, and the General – I mean the other General, momentarily lost his grip. Ergo seized his chance and capitalised on his opportunity, which just about amounts to the same thing, and leapt upwards in the shaft, with the elf ahead of him, complaining that Ergo was forcing the pace, and Quirkhardt way up ahead, nearly at the entrance. Moundrot grabbed again, this time using one of his sharp claws, which penetrated Ergo’s sensitive bottom area and caused him to let out a great cry of pain, pleasing Moundrot no end. Moundrot pulled Ergo towards him and opened his huge, grinning, dribbling jaws, so that he could crunch down on his torso and rip him in half. 95