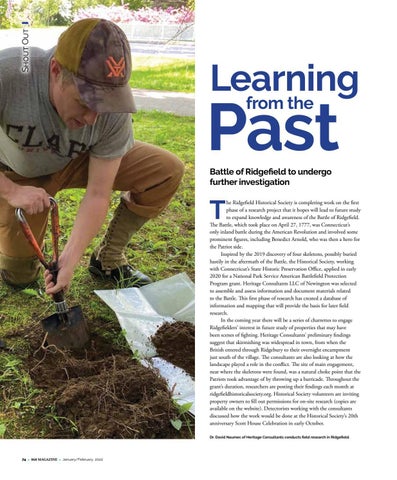 Past Battle of Ridgefield to undergo further investigation

he Ridgefield Historical Society is completing work on the first phase of a research project that it hopes will lead to future study to expand knowledge and awareness of the Battle of Ridgefield. The Battle, which took place on April 27, 1777, was Connecticut’s only inland battle during the American Revolution and involved some prominent figures, including Benedict Arnold, who was then a hero for the Patriot side. Inspired by the 2019 discovery of four skeletons, possibly buried hastily in the aftermath of the Battle, the Historical Society, working with Connecticut’s State Historic Preservation Office, applied in early 2020 for a National Park Service American Battlefield Protection Program grant. Heritage Consultants LLC of Newington was selected to assemble and assess information and document materials related to the Battle. This first phase of research has created a database of information and mapping that will provide the basis for later field research. In the coming year there will be a series of charrettes to engage Ridgefielders’ interest in future study of properties that may have been scenes of fighting. Heritage Consultants’ preliminary findings suggest that skirmishing was widespread in town, from when the British entered through Ridgebury to their overnight encampment just south of the village. The consultants are also looking at how the landscape played a role in the conflict. The site of main engagement, near where the skeletons were found, was a natural choke point that the Patriots took advantage of by throwing up a barricade. Throughout the grant’s duration, researchers are posting their findings each month at ridgefieldhistoricalsociety.org. Historical Society volunteers are inviting property owners to fill out permissions for on-site research (copies are available on the website). Detectorists working with the consultants discussed how the work would be done at the Historical Society’s 20th anniversary Scott House Celebration in early October.