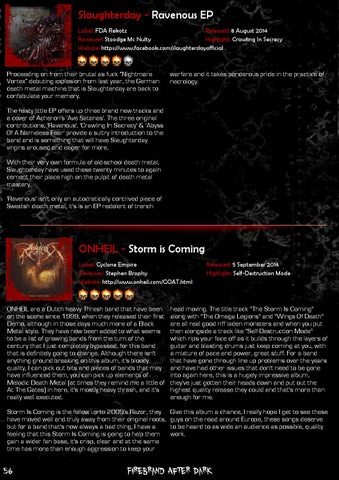 Proceeding on from their brutal as fuck â&#x20AC;&#x153;Nightmare Vortexâ&#x20AC;? debuting explosion from last year, the German death metal machine that is Slaughterday are back to confabulate your memory.

warfare and it takes ponderous pride in the practice of necrology.

The feisty little EP offers up three brand new tracks and a cover of Acheron's 'Ave Satanas'. The three original contributions, 'Ravenous', 'Crawling In Secrecy' & 'Abyss Of A Nameless Fear' provide a sultry introduction to the band and is something that will have Slaughterday virgins aroused and eager for more. With their very own formula of old-school death metal, Slaughterday have used these twenty minutes to again cement their place high on the pulpit of death metal mastery. 'Ravenous' isn't only an autocratically contrived piece of Swedish death metal, it's is an EP redolent of trench

ONHEIL are a Dutch heavy Thrash band that have been on the scene since 1999, when they released their first Demo, although in those days much more of a Black Metal style. They have now been added to what seems to be a list of growing bands from the turn of the century that I just completely bypassed, for this band that is definitely going to change. Although there isn't anything ground breaking on this album, it's bloody quality, I can pick out bits and pieces of bands that may have influenced them, you can pick up elements of Melodic Death Metal (at times they remind me a little of At The Gates) in here, it's mostly heavy thrash, and it's really well executed.

head moving. The title track "The Storm Is Coming" along with "The Omega Legions" and "Wings Of Death" are all real good riff laden monsters and when you put then alongside a track like "Self-Destruction Mode" which rips your face off as it builds through the layers of guitar and blasting drums just keep coming at you, with a mixture of pace and power, great stuff. For a band that have gone through line up problems over the years and have had other issues that don't need to be gone into again here, this is a hugely impressive album, they've just gotten their heads down and put out the highest quality release they could and that's more than enough for me.

Storm Is Coming is the follow up to 2009's Razor, they have moved well and truly away from their original roots, but for a band that's now always a bad thing, I have a feeling that this Storm Is Coming is going to help them gain a wider fan base, it's crisp, clear and at the same time has more than enough aggression to keep your

Give this album a chance, I really hope I get to see these guys on the road around Europe, these songs deserve to be heard to as wide an audience as possible, quality work. 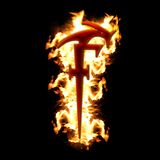 Featuring interviews with Cannibal Corpse, Goatwhore, Dictated, 1349 plus reviews of all the latest album releases including those from Dark...

Featuring interviews with Cannibal Corpse, Goatwhore, Dictated, 1349 plus reviews of all the latest album releases including those from Dark...