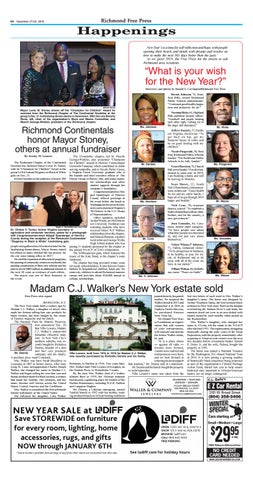 Happenings New Year’s is a time for self-reflection and hope, with people opening their hearts and minds with dreams and resolve on how to make the next 365 days better than the past. As we greet 2019, the Free Press hit the streets to ask Richmond area residents:

“What is your wish for the New Year?” Interviews and photos by Ronald E. Carrington/Richmond Free Press

Mayor Levar M. Stoney shows off the “Champion for Children” Award he received from the Richmond Chapter of The Continental Societies at the group’s Dec. 21 fundraising dinner-dance in Downtown. With him are Beverly Davis, left, chair of the organization’s Ways and Means Committee, and Nkechi George-Winkler, president of the Richmond chapter.

The 33-member chapter, led by Nkechi George-Winkler, also presented “Champion The Richmond Chapter of the Continental for Children” awards to Henrico County-based Societies Inc. honored Mayor Levar M. Stoney Genworth Financial, which contributes to childwith its “Champion for Children” Award at the serving nonprofits, and to Necole Parker Green, group’s 43rd Annual Elegance in Black & White a Virginia Union University graduate who is gala on Dec. 21. the founder and chief executive officer of The In brief remarks to the audience of nearly 500 Elocen Group in Bowie, Md., and raises money for scholarships and other student supports through her company’s foundation. Congresswoman-elect Abigail Spanberger of Henrico County offered greetings at the event before she heads to Washington to be sworn in early next year to represent Virginia’s 7th District in the U.S. House of Representatives. Other speakers included Jordan Woods, an Old Dominion University freshman repRegina H. Boone/Richmond Free Press resenting students who have Dr. Clinton V. Turner, former Virginia secretary of received Helen W.P. Wallace agriculture and consumer services, poses for a photograph scholarships from the chapter, with Congresswoman-elect Abigail Spanberger of Henrico and Makaia Ransom, a spoken County during the reception at the Richmond Continentals’ word artist and George Wythe “Elegance in Black & White” fundraising gala. High School student who was people who gathered at a Downtown hotel for the among 11 students sponsored by the chapter in fundraising dinner-dance, Mayor Stoney touted the annual NAACP ACT-SO competition. his efforts to make children the top priority for The $100-a-person gala, which featured the the city since taking office in 2017. music of the Katz Band, is the chapter’s main He cited the expansion of after-school programs, fundraiser. the opening of community centers on weekends, the The chapter has long provided winter coats pending construction of three new schools and his for needy schoolchildren. It also delivers Easter plan to invest $800 million in additional schools in baskets to hospitalized children, helps pay for the next 20 years as evidence of such efforts. inner-city children to attend Richmond summer The mayor was one of three honorees at camps and provides about $10,000 annual in the event. college scholarships.

Norman Hicks, 65, Highland Park, part-time security officer: “Goodwill and people treating each other right. Getting rid of the anger and disrespect.”

Jeffery Daniels, 37, Northern Virginia, electrician: “To get back on top, get my financial house in order and be on good footing with my children.” Nicole Fitzgerald, 38, West End, Richmond Public Schools teacher: “For Richmond Public Schools to be fully funded.” Grace Harrison, 72, Church Hill, travel leader: “For all of my dreams to come true. In 2019, I am building a home and will be moving to Moseley.

Sean Moore, 22, South Side’s Manchester, communications technician: “Good health for me and my entire family. I hope all of us get through 2019 happy and healthy.”

Nick Cone, 70, museum district, retired: “To establish a better relationship with my older brother; and for the country, a new government.”

Jean Gonzales, 65, Carytown, retired child caregiver: “To have people care about what other people are interested in, and not just care about themselves.”

Velma “Mama J” Johnson, 71, Fulton, restaurant owner: “To be prosperous in business, to be healthy, to pray for my city of Richmond and to do away with all of the crime we have in our nation.” Tiffany Wilson, 40, Midlothian, nurse: “Peace on Earth.”

IRVINGTON, N.Y. The New York estate built a century ago by Madam C.J. Walker, a daughter of slaves who made her fortune selling hair care products for black women, has been bought by the owner of Essence magazine and his family. The National Trust for Historic Preservation announced Dec. 20 that Villa Lewaro, Madam C.J. Walker’s century-old Italianate villa-style mansion in New York City’s northern suburbs, was recently bought by Richelieu Dennis, founder of a skin and hair care products Mr. Dennis company, and his family. A purchase price wasn’t released. Mrs. Walker was born Sarah Breedlove in Louisiana in 1867 to former slaves. After marrying St. Louis newspaperman Charles Joseph Walker, she changed her name to Madam C.J. Walker and began selling her own hair care and beauty products made for black women, a venture that made her wealthy. Her products, and her name, became well known across the United States, Central America and the Caribbean. Mrs. Walker is considered the first self-made female millionaire in the United States. She followed her daughter, Lelia Walker

passed down by his grand- first two letters of each word in Mrs. Walker’s mother. He acquired the daughter’s name. The home was designed by Walker brand in 2013 and Vertner Woodson Tandy, the first licensed black relaunched it in 2016 as architect in New York state. Built on the heights Sephora. Earlier this year, overlooking the Hudson River’s east bank, the he purchased Essence mansion stood out even in an area dotted with from Time Inc. estates owned by such wealthy white people as Mr. Dennis’ New Voic- the Rockefellers. es Foundation, an organiMrs. Walker’s daughter, who changed her zation that aids women name to A’Lelia, left the estate to the NAACP of color entrepreneurs, after she died 1931. The organization, struggling will renovate and operate financially during the early years of the Great the former Walker estate, Depression, sold the property immediately after he said. acquiring it. It had several owners over the next “It is a place where few decades before investment banker Harold — against all odds — E. Doley Jr. and his wife, Helena, bought the dreams were formed, property in 1993. visions were realized and The home was named a National Treasure Villa Lewaro, built from 1916 to 1918 for Madam C.J. Walker, entrepreneurs were born, by the Washington, D.C.-based National Trust was recently purchased by Richelieu Dennis and his family. and we look forward to in 2014. It is now among a growing number returning its use to support of historically black properties being protected Robinson, to Harlem in 1916. Two years later, that mission,” Mr. Dennis said in a statement. as part of the organization’s Cultural Heritage Mrs. Walker built Villa Lewaro in Irvington, on Mr. Dennis and his family bought the property Action Fund, started last year to help ensure the Hudson River in Westchester County. in mid-September. historical sites important to African-American By the time Mrs. Walker died of a kidney Villa Lewaro’s name was taken from the history are no longer endangered. ailment there in 1919, her 34-room mansion DiamonDs • Watches had become a gathering place for leaders of the C.L. Belle’s JeWelry • repairs Harlem Renaissance, including W.E.B. DuBois 19 East Broad strEEt and Langston Hughes. richmond, Va 23219 Mr. Dennis, a Liberian immigrant, started (804) 648-1044 Sundial brands in 1992 with his mother, mak3101 W. Broad Street www.wallErjEwElry.com ing products based on African healing traditions (804) 358-3406