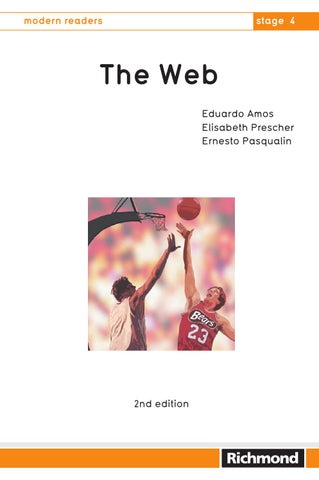 Sharon hurried into the dressing room. She was late. Marilyn was there finishing her make-up. “Did you see my necklace, Sharon?” asked Marilyn. “What necklace?” “The pearl necklace. It was right here on my table. I can’t find it.” “Did you look in the drawers?” asked Sharon. “Yes, but there’s no sign of it.” “Well, you can take my necklace,” said Sharon. “We’ll look for your necklace after the show.” “Thanks,” Marilyn said. “Listen! I saw Bruce waiting for you outside.” “Oh, no! Mrs Carson doesn’t like him. I’ll tell him to go away.”

Sharon and Marilyn were students at Sunset Hill High School and worked part-time for Mrs Carson’s modeling agency. They were working at a fashion show, modeling a famous designer’s new collection. The next afternoon, the two girls went jogging at Sunset Park. Sharon’s boyfriend, Bruce, and his best friend, Danny, were waiting for them at Joe’s Café in the park. “Are you sure you took the necklace to the fashion show last night?” Sharon was asking Marilyn as they approached the boys’ table. “I’m positive,” answered Marilyn. “Do you think someone stole it?” asked Sharon. “I think so,” Marilyn said. “One minute it was there, the next minute it was gone!” “Don’t you two have anything else to talk about?” said Bruce rudely. “All you do is talk about that stupid necklace!” Then he stood up and ran off to the jogging lane.

“What’s the matter with him, Sharon?” asked Danny. “I don’t know. Bruce has changed a lot. He’s different now.” “What do you mean, different?” Danny asked. “I don’t know. He’s not the same person anymore.” “Perhaps it’s because of the game tomorrow,” suggested Danny. “I don’t think so,” Sharon said. “He’s the best player on the team.” “I still think he’s worried about the game,” said Danny.

The high school gym was crowded the next day. The Falcons were winning, and the crowd was screaming and shouting enthusiastically. The Bears were losing, but playing fair. Towards the end of the game, Bruce hit one of the Bears in the eye and was sent off. “What’s the matter with Bruce O’Keefe?” asked Coach Rogers. “I can’t believe he did that.” “I think he lost control again,” said Coach Taylor.

Minutes later, Bruce was taking a shower in the locker room when a skinny boy in a black leather jacket approached him. “Going home early tonight, Champ?” “Gus! What are you doing here?” Bruce said angrily. “I told you not to talk to me at school!” “I came for the money.” “You know I don’t have it yet.” “Your problem, buddy!” Gus said sarcastically. “The Warriors are after me for the money. I’ll have to tell them you don’t have it.” “Come on, Gus,” begged Bruce. “You can’t do that to me.” “Can’t I?” Gus sounded angry now. “You either pay the fifty bucks, or else...” “Or else?” “Or else I’ll tell the Warriors to collect the money directly from you,” shouted Gus.

ACTIVITIES Before Reading 1. Look at the title and front cover of the book. What do you think “The Web” is about? a) the internet b) spiders c) the drug problem

2. Read pages 3 and 4 and complete the sentences with the words from the box below: collection

a) When Sharon entered the dressing room, Marilyn was finishing her . . b) Sharon and Marilyn worked part-time at a c) The girls were working at a . d) They were modeling a new .