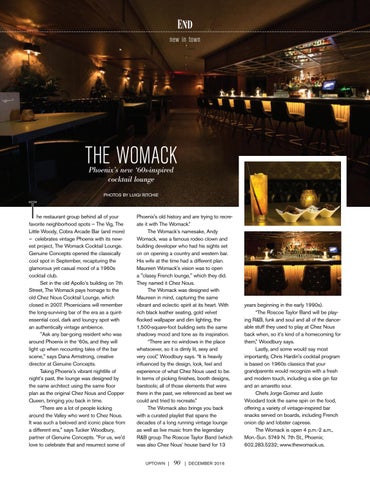 he restaurant group behind all of your favorite neighborhood spots – The Vig, The Little Woody, Cobra Arcade Bar (and more) – celebrates vintage Phoenix with its newest project, The Womack Cocktail Lounge. Genuine Concepts opened the classically cool spot in September, recapturing the glamorous yet casual mood of a 1960s cocktail club. Set in the old Apollo’s building on 7th Street, The Womack pays homage to the old Chez Nous Cocktail Lounge, which closed in 2007. Phoenicians will remember the long-surviving bar of the era as a quintessential cool, dark and loung-y spot with an authentically vintage ambience. "Ask any bar-going resident who was around Phoenix in the ‘60s, and they will light up when recounting tales of the bar scene," says Dana Armstrong, creative director at Genuine Concepts. Taking Phoenix’s vibrant nightlife of night’s past, the lounge was designed by the same architect using the same floor plan as the original Chez Nous and Copper Queen, bringing you back in time. “There are a lot of people kicking around the Valley who went to Chez Nous. It was such a beloved and iconic place from a different era," says Tucker Woodbury, partner of Genuine Concepts. "For us, we'd love to celebrate that and resurrect some of

Phoenix's old history and are trying to recreate it with The Womack.” The Womack’s namesake, Andy Womack, was a famous rodeo clown and building developer who had his sights set on on opening a country and western bar. His wife at the time had a different plan. Maureen Womack's vision was to open a "classy French lounge," which they did. They named it Chez Nous. The Womack was designed with Maureen in mind, capturing the same vibrant and eclectic spirit at its heart. With rich black leather seating, gold velvet flocked wallpaper and dim lighting, the 1,500-square-foot building sets the same shadowy mood and tone as its inspiration. “There are no windows in the place whatsoever, so it is dimly lit, sexy and very cool,” Woodbury says. “It is heavily influenced by the design, look, feel and experience of what Chez Nous used to be. In terms of picking finishes, booth designs, barstools; all of those elements that were there in the past, we referenced as best we could and tried to recreate.” The Womack also brings you back with a curated playlist that spans the decades of a long running vintage lounge as well as live music from the legendary R&B group The Roscoe Taylor Band (which was also Chez Nous’ house band for 13 UPTOWN |

years beginning in the early 1990s). “The Roscoe Taylor Band will be playing R&B, funk and soul and all of the danceable stuff they used to play at Chez Nous back when, so it’s kind of a homecoming for them,” Woodbury says. Lastly, and some would say most importantly, Chris Hardin's cocktail program is based on 1960s classics that your grandparents would recognize with a fresh and modern touch, including a sloe gin fizz and an amaretto sour. Chefs Jorge Gomez and Justin Woodard took the same spin on the food, offering a variety of vintage-inspired bar snacks served on boards, including French onion dip and lobster caprese. The Womack is open 4 p.m.-2 a.m., Mon.-Sun. 5749 N. 7th St., Phoenix; 602.283.5232; www.thewomack.us.