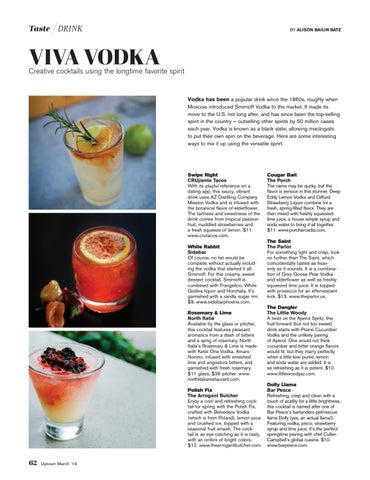 Vodka has been a popular drink since the 1860s, roughly when Moscow introduced Smirnoff Vodka to the market. It made its move to the U.S. not long after, and has since been the top-selling spirit in the country – outselling other spirits by 50 million cases each year. Vodka is known as a blank slate, allowing mixologists to put their own spin on the beverage. Here are some interesting ways to mix it up using the versatile sprirt.

Swipe Right CRUjiente Tacos With its playful reference on a dating app, this saucy, vibrant drink uses AZ Distilling Company Mission Vodka and is infused with the botanical flavor of elderflower. The tartness and sweetness of the drink comes from tropical passion fruit, muddled strawberries and a fresh squeeze of lemon. $11. www.crutacos.com. White Rabbit Sidebar Of course, no list would be complete without actually including the vodka that started it all: Smirnoff. For this creamy, sweet dessert cocktail, Smirnoff is combined with Frangelico, White Godiva liquor and Horchata. It’s garnished with a vanilla sugar rim. $9. www.sidebarphoenix.com. Rosemary & Lime North Italia Available by the glass or pitcher, this cocktail features pleasant aromatics from a dash of bitters and a sprig of rosemary. North Italia’s Rosemary & Lime is made with Ketel One Vodka, Amaro Nonino, infused with smashed lime and angostura bitters, and garnished with fresh rosemary. $11 glass, $36 pitcher. www. northitaliarestaurant.com. Polish Fix The Arrogant Butcher Enjoy a cool and refreshing cocktail for spring with the Polish Fix, crafted with Belvedere Vodka (which is from Poland), lemon juice and crushed ice, topped with a seasonal fruit smash. The cocktail is as eye-catching as it is tasty, with an ombre of bright colors. $12. www.thearrogantbutcher.com.

Cougar Bait The Porch The name may be quirky, but the flavor is serious in this stunner. Deep Eddy Lemon Vodka and Gifford Strawberry Liquor combine for a fresh, spring-filled flavor. They are then mixed with freshly squeezed lime juice, a house simple syrup and soda water to bring it all together. $11. www.porcharcadia.com. The Saint The Parlor For something light and crisp, look no further than The Saint, which coincidentally tastes as heavenly as it sounds. It is a combination of Grey Goose Pear Vodka and elderflower as well as freshly squeezed lime juice. It is topped with prosecco for an effervescent kick. $13. www.theparlor.us. The Dangler The Little Woody A twist on the Aperol Spritz, this fruit-forward (but not too sweet) drink starts with Prairie Cucumber Vodka and the unlikely pairing of Aperol. One would not think cucumber and bitter orange flavors would fit, but they marry perfectly when a little kiwi puree, lemon and soda water are added. It is as refreshing as it is potent. $10. www.littlewoodyaz.com. Dolly Llama Bar Pesce Refreshing, crisp and clean with a touch of acidity for a little brightness, this cocktail is named after one of Bar Pesce’s bartenders pet/rescue llama Dolly (yes, an actual llama!). Featuring vodka, pisco, strawberry syrup and lime juice, it’s the perfect springtime pairing with chef Cullen Campbell’s global cuisine. $10. www.barpesce.com.