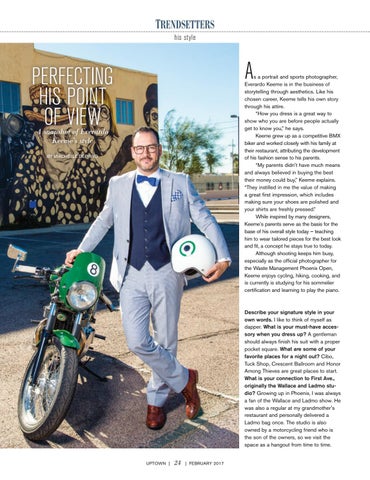 PERFECTING HIS POINT OF VIEW

s a portrait and sports photographer, Everardo Keeme is in the business of storytelling through aesthetics. Like his chosen career, Keeme tells his own story through his attire. “How you dress is a great way to show who you are before people actually get to know you,” he says. Keeme grew up as a competitive BMX biker and worked closely with his family at their restaurant, attributing the development of his fashion sense to his parents. “My parents didn't have much means and always believed in buying the best their money could buy,” Keeme explains. “They instilled in me the value of making a great first impression, which includes making sure your shoes are polished and your shirts are freshly pressed.” While inspired by many designers, Keeme’s parents serve as the basis for the base of his overall style today – teaching him to wear tailored pieces for the best look and fit, a concept he stays true to today. Although shooting keeps him busy, especially as the official photographer for the Waste Management Phoenix Open, Keeme enjoys cycling, hiking, cooking, and is currently is studying for his sommelier certification and learning to play the piano.

Describe your signature style in your own words. I like to think of myself as dapper. What is your must-have accessory when you dress up? A gentleman should always finish his suit with a proper pocket square. What are some of your favorite places for a night out? Cibo, Tuck Shop, Crescent Ballroom and Honor Among Thieves are great places to start. What is your connection to First Ave., originally the Wallace and Ladmo studio? Growing up in Phoenix, I was always a fan of the Wallace and Ladmo show. He was also a regular at my grandmother's restaurant and personally delivered a Ladmo bag once. The studio is also owned by a motorcycling friend who is the son of the owners, so we visit the space as a hangout from time to time. UPTOWN |