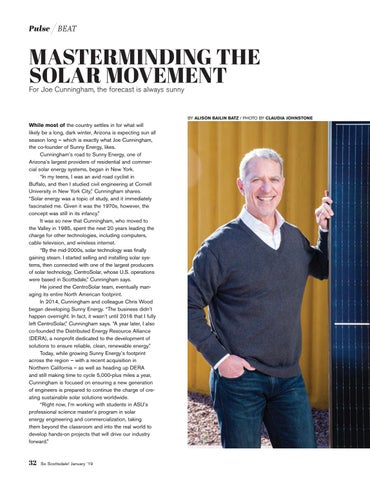 MASTERMINDING THE SOLAR MOVEMENT For Joe Cunningham, the forecast is always sunny

While most of the country settles in for what will likely be a long, dark winter, Arizona is expecting sun all season long – which is exactly what Joe Cunningham, the co-founder of Sunny Energy, likes. Cunningham’s road to Sunny Energy, one of Arizona’s largest providers of residential and commercial solar energy systems, began in New York. “In my teens, I was an avid road cyclist in Buffalo, and then I studied civil engineering at Cornell University in New York City,” Cunningham shares. “Solar energy was a topic of study, and it immediately fascinated me. Given it was the 1970s, however, the concept was still in its infancy.” It was so new that Cunningham, who moved to the Valley in 1985, spent the next 20 years leading the charge for other technologies, including computers, cable television, and wireless internet. “By the mid-2000s, solar technology was finally gaining steam. I started selling and installing solar systems, then connected with one of the largest producers of solar technology, CentroSolar, whose U.S. operations were based in Scottsdale,” Cunningham says. He joined the CentroSolar team, eventually managing its entire North American footprint. In 2014, Cunningham and colleague Chris Wood began developing Sunny Energy. “The business didn’t happen overnight. In fact, it wasn’t until 2016 that I fully left CentroSolar,” Cunningham says. “A year later, I also co-founded the Distributed Energy Resource Alliance (DERA), a nonprofit dedicated to the development of solutions to ensure reliable, clean, renewable energy.” Today, while growing Sunny Energy’s footprint across the region – with a recent acquisition in Northern California – as well as heading up DERA and still making time to cycle 5,000-plus miles a year, Cunningham is focused on ensuring a new generation of engineers is prepared to continue the charge of creating sustainable solar solutions worldwide. “Right now, I’m working with students in ASU’s professional science master’s program in solar energy engineering and commercialization, taking them beyond the classroom and into the real world to develop hands-on projects that will drive our industry forward.”