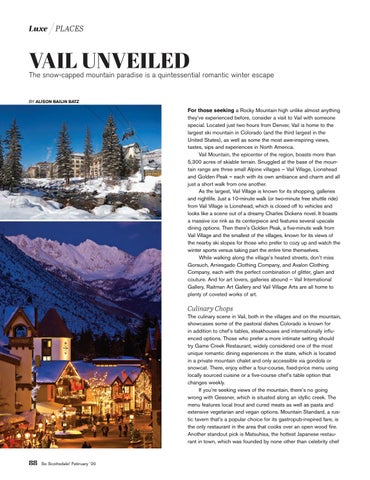 The snow-capped mountain paradise is a quintessential romantic winter escape

For those seeking a Rocky Mountain high unlike almost anything they’ve experienced before, consider a visit to Vail with someone special. Located just two hours from Denver, Vail is home to the largest ski mountain in Colorado (and the third largest in the United States), as well as some the most awe-inspiring views, tastes, sips and experiences in North America. Vail Mountain, the epicenter of the region, boasts more than 5,300 acres of skiable terrain. Snuggled at the base of the mountain range are three small Alpine villages – Vail Village, Lionshead and Golden Peak – each with its own ambiance and charm and all just a short walk from one another. As the largest, Vail Village is known for its shopping, galleries and nightlife. Just a 10-minute walk (or two-minute free shuttle ride) from Vail Village is Lionshead, which is closed off to vehicles and looks like a scene out of a dreamy Charles Dickens novel. It boasts a massive ice rink as its centerpiece and features several upscale dining options. Then there’s Golden Peak, a five-minute walk from Vail Village and the smallest of the villages, known for its views of the nearby ski slopes for those who prefer to cozy up and watch the winter sports versus taking part the entire time themselves. While walking along the village’s heated streets, don’t miss Gorsuch, Arriesgado Clothing Company, and Avalon Clothing Company, each with the perfect combination of glitter, glam and couture. And for art lovers, galleries abound – Vail International Gallery, Raitman Art Gallery and Vail Village Arts are all home to plenty of coveted works of art.

Culinary Chops The culinary scene in Vail, both in the villages and on the mountain, showcases some of the pastoral dishes Colorado is known for in addition to chef’s tables, steakhouses and internationally influenced options. Those who prefer a more intimate setting should try Game Creek Restaurant, widely considered one of the most unique romantic dining experiences in the state, which is located in a private mountain chalet and only accessible via gondola or snowcat. There, enjoy either a four-course, fixed-price menu using locally sourced cuisine or a five-course chef’s table option that changes weekly. If you’re seeking views of the mountain, there’s no going wrong with Gessner, which is situated along an idyllic creek. The menu features local trout and cured meats as well as pasta and extensive vegetarian and vegan options. Mountain Standard, a rustic tavern that’s a popular choice for its gastropub-inspired fare, is the only restaurant in the area that cooks over an open wood fire. Another standout pick is Matsuhisa, the hottest Japanese restaurant in town, which was founded by none other than celebrity chef