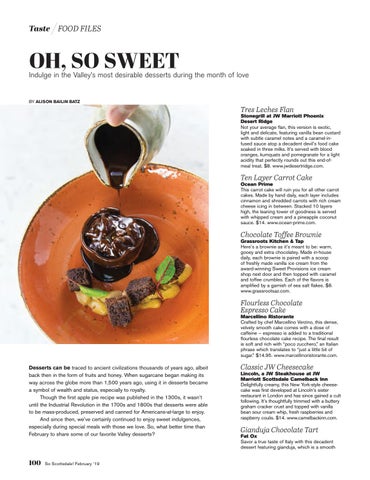 Stonegrill at JW Marriott Phoenix Desert Ridge Not your average flan, this version is exotic, light and delicate, featuring vanilla bean custard with subtle caramel notes and a caramel-infused sauce atop a decadent devil’s food cake soaked in three milks. It’s served with blood oranges, kumquats and pomegranate for a light acidity that perfectly rounds out this end-ofmeal treat. $8. www.jwdesertridge.com.

Ocean Prime This carrot cake will ruin you for all other carrot cakes. Made by hand daily, each layer includes cinnamon and shredded carrots with rich cream cheese icing in between. Stacked 10 layers high, the leaning tower of goodness is served with whipped cream and a pineapple coconut sauce. $14. www.ocean-prime.com.

Grassroots Kitchen &amp; Tap Here’s a brownie as it’s meant to be: warm, gooey and extra chocolatey. Made in-house daily, each brownie is paired with a scoop of freshly made vanilla ice cream from the award-winning Sweet Provisions ice cream shop next door and then topped with caramel and toffee crumbles. Each of the flavors is amplified by a garnish of sea salt flakes. $8. www.grassrootsaz.com.

Marcellino Ristorante Crafted by chef Marcellino Verzino, this dense, velvety smooth cake comes with a dose of caffeine – espresso is added to a traditional flourless chocolate cake recipe. The final result is soft and rich with “poco zucchero,” an Italian phrase which translates to “just a little bit of sugar.” $14.95. www.marcellinoristorante.com.

Desserts can be traced to ancient civilizations thousands of years ago, albeit back then in the form of fruits and honey. When sugarcane began making its way across the globe more than 1,500 years ago, using it in desserts became a symbol of wealth and status, especially to royalty. Though the first apple pie recipe was published in the 1300s, it wasn’t until the Industrial Revolution in the 1700s and 1800s that desserts were able to be mass-produced, preserved and canned for Americans-at-large to enjoy. And since then, we’ve certainly continued to enjoy sweet indulgences, especially during special meals with those we love. So, what better time than February to share some of our favorite Valley desserts?

Fat Ox Savor a true taste of Italy with this decadent dessert featuring gianduja, which is a smooth