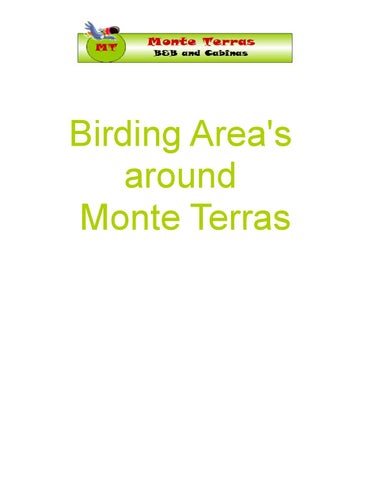 Palo Verde National Park The 18417 hectare national park Palo Verde is a wetland sanctuary in Costa Ricaâ&#x20AC;&#x2122;s driest province that lies on the northeastern banks of the mouth of the Rio Tempisque at the head of the Gulf of Nicoya. It includes mangrove forest, swamps, marshes, grassy savannahs and evergreen forests.

Palo Verde has the greatest concentration of waterfowl and shorebirds in Central America, with over 300 different species of birds. Large flocks of heron (incl. the rare black-crowned night heron), stork (incl. the endangered jabiru stork), spoonbill, egret, ibis, grebe and duck, and forest birds, incl. scarlet macaw, great curassow, keel-billed toucan and parrot are commonly seen. You can also see many species of mammals (the park protects the largest population of jaguarundi) and reptiles in these wetlands. The dry season (December to March) is the best time to visit this park since the birds tend to congregate around the remaining lakes and marshes, while the trees loose their leaves, thus allowing a clearer view. During the wet months the access to this park may be limited due to flooding.

Arenal National Park Arenal was made a national park in 1995 and is part of the conservation area of Arenal, which protects most of the Cordillera de Tilaran. The area is rugged and varied and biodiversity is high: roughly 50% of the species of birds, mammals, reptiles and amphibians known in Costa Rica can be found here.

Both parks are birding paradises and the list of recorded species tops out over 400, including the elusive quetzal. A guide is highly recommended, but please make your reservation one day ahead of time. The guides speak English and are trained naturalists. The birding tours start a 6 am with a 2 person minimum and a 6 person maximum and will take about 5 hrs. Normally between 40 and 60 species are spotted during these tours. Longer tours are available on request.

CaĂąo Negro Refuge This 102 sq km refuge is frequented by birders each year from January through March to spot un unequalled assortment of waterfowl. In this period, when migratory birds land in large numbers, avian density is most definitely world class.

CaĂąo Negro is regarded one of the premium destination for birders in Central America. During the dry season, the sheer density of birds in the park is astounding, and youâ&#x20AC;&#x2122;ll be impressed with the number and variety of species that inhabit it. In the winter months, migratory duck congregations can be enormous, and very well represented groups include kingfisher, heron, egret, ibis, rail, anhinga, roseate spoonbill and stork. The refuge is also the only reliable site in Costa Rica for olivaceous cormorant, nicaraguan grackle and yellow-headed vulture.

Santa Rosa National Park Among the oldest and largest national parks in Costa Rica (established in 1972) Santa Rosaâ&#x20AC;&#x2122;s 38674 hectares protects the largest remaining stand of tropical dry forest in Central America. Wildlife is varied and prolific, especially during the dry season when animals congregate around the remaining water sources and the trees loose their foliage.

More than 250 bird species have been recorded, including the raucous white-throated magpie jay with its maniacally curled feathers. The forests contain parrot, parakeet, trogon and tanager, and as you head down to the coast, a variety of coastal birds. Bats are also common: 50 to 60 different species have been identified in Santa Rosa.