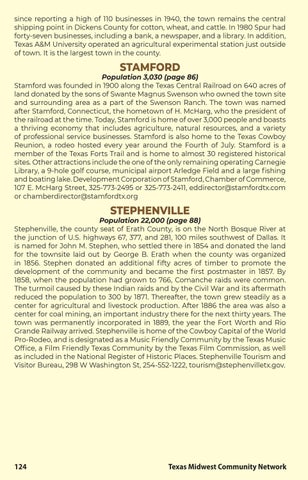 since reporting a high of 110 businesses in 1940, the town remains the central shipping point in Dickens County for cotton, wheat, and cattle. In 1980 Spur had forty-seven businesses, including a bank, a newspaper, and a library. In addition, Texas A&amp;M University operated an agricultural experimental station just outside of town. It is the largest town in the county.

Population 3,030 (page 86) Stamford was founded in 1900 along the Texas Central Railroad on 640 acres of land donated by the sons of Swante Magnus Swenson who owned the town site and surrounding area as a part of the Swenson Ranch. The town was named after Stamford, Connecticut, the hometown of H. McHarg, who the president of the railroad at the time. Today, Stamford is home of over 3,000 people and boasts a thriving economy that includes agriculture, natural resources, and a variety of professional service businesses. Stamford is also home to the Texas Cowboy Reunion, a rodeo hosted every year around the Fourth of July. Stamford is a member of the Texas Forts Trail and is home to almost 30 registered historical sites. Other attractions include the one of the only remaining operating Carnegie Library, a 9-hole golf course, municipal airport Arledge Field and a large fishing and boating lake. Development Corporation of Stamford, Chamber of Commerce, 107 E. McHarg Street, 325-773-2495 or 325-773-2411, eddirector@stamfordtx.com or chamberdirector@stamfordtx.org

Population 22,000 (page 88) Stephenville, the county seat of Erath County, is on the North Bosque River at the junction of U.S. highways 67, 377, and 281, 100 miles southwest of Dallas. It is named for John M. Stephen, who settled there in 1854 and donated the land for the townsite laid out by George B. Erath when the county was organized in 1856. Stephen donated an additional fifty acres of timber to promote the development of the community and became the first postmaster in 1857. By 1858, when the population had grown to 766, Comanche raids were common. The turmoil caused by these Indian raids and by the Civil War and its aftermath reduced the population to 300 by 1871. Thereafter, the town grew steadily as a center for agricultural and livestock production. After 1886 the area was also a center for coal mining, an important industry there for the next thirty years. The town was permanently incorporated in 1889, the year the Fort Worth and Rio Grande Railway arrived. Stephenville is home of the Cowboy Capital of the World Pro-Rodeo, and is designated as a Music Friendly Community by the Texas Music Office, a Film Friendly Texas Community by the Texas Film Commission, as well as included in the National Register of Historic Places. Stephenville Tourism and Visitor Bureau, 298 W Washington St, 254-552-1222, tourism@stephenvilletx.gov. 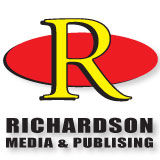