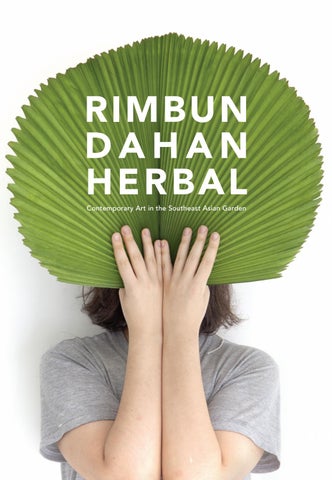 Life continually presents choices that direct our lives in unpredictable ways. I started a garden 26 years ago, following my parentsâ&#x20AC;&#x2122; choice in Australia, decades before, to plant indigenous. I did the same but in Malaysia, where such a thing had never been considered. A garden? And what comes to mind for locals is flowers and just maybe fruit trees. A forest garden? Whatâ&#x20AC;&#x2122;s that? Now, as magnificent trees tower above us they understand its value, but appreciation from the stream of artists who have stayed with us has been there all along: they see the differences and similarities compared with other landscapes they are familiar with, they appreciate the fragrance, the stories of herbal remedies and hallucinogenics (big in the tropics), the sense of home and belonging that trees always confer. Once we are familiar with a species, you have an automatic affinity with it and an access point to a different world.Artists respond in different ways, but there are few who havenâ&#x20AC;&#x2122;t found something to inspire their practice. As the afternoon thunder storm gets under way while I type, and we rush to disconnect our devices, we have an opportunity to reconnect to the forces of nature as the storm whips through the garden, pruning as it goes, making the trees stronger and more magnificent than before, leaving a world swept clean for artists to ponder. Angela Hijjas Rimbun Dahan Co-founder and Arts Programme Director

Malaysia is a diverse mix of ethnicities and cultures in one of the most biodiverse regions in the world. This eclecticism filters through to the art, architecture and cuisine. Rimbun Dahan is a fourteen acre artist compound 40 minutes from central Kuala Lumpur. It is also home to the founders, Australian born programme director and environmentalist Angela Hijjas and her husband, prominent architect Hijjas Kasturi. Rimbun Dahan initially looks like a resort, set in a jungle setting with pools and architecturally designed buildings. Its serene appearance is deceiving as it has been a central hub for Malaysian art production, exhibitions, performance and dialogue for over 20 years. I spent three months here in early 2017 which allowed for the time and space to make, research and think. As is often the case, it was the people I met there that became one of the most important parts of the residency. I had the chance to interact with artists, activists, curators, writers and performers from Malaysia, Singapore, Indonesia, Germany, Austria, Australia and Africa. This cross-cultural exchange was deepened with a variety of collaborative projects, social events and exposure with the local arts scene. My artistic research is driven primarily by an interest in gardens and how I might understand a culture through these spaces. The residency immersed me in a tropical garden with all the pleasures and dangers that brings. I see gardens as exciting and complex intersections of art, nature and culture. Rimbun Dahan Herbal : Contemporary Art in the Southeast Asian Garden is a collaborative project between the eight creatives present at Rimbun Dahan in early 2017; Syar S Alia,Haffendi Anuar, Kelvin Atmadibrata, Zulkifli Lee, Veronika Neukirch, Sabine Reindel, Laura Wills and myself. The concept of the project was for everyone to create a series of page works that responded to individual plants within the residency garden. It has been fascinating and rewarding to see how everyone took this simple idea and created such arresting and individual works in response. Richard Orjis

panggil-panggil by Syar S. Alia i. i choreograph my body like so: bowed at the waist, eyes down right arm stick straight fingers pointing to the ground left arm folded with my hand on the crook of my right elbow or behind me on the small of my own back hold an assalamualaikum1 in my mind as i pass the graves of the sleeping dead so as not to wake them. yours gets harder to find every year, not that i come every year, when i arrive i break from my posture, i touch your headstone like saying, this one was mine. the cemetery gets more crowded every year, or maybe it was like that already when we buried you, fitted you in between the stones and bricks and wooden frames the fallen headstones and metal gates and overgrown shrubs and shining white gravel and the kemboja trees blooming brilliant. i find the best ones — white silk with a sun yolk center, petals milky soft like the fat of your arms, where i used to hide, i throw away the bruised blooms, the shrunken, those with petals incomplete, the flowers closest to perfect i lay one by one by one, a string of sunburst pearls along the length of you, an offering from my empty, cupped hands which prayer was supposed to fill. in my mind, my heart, the waiting of my body i say, here here, mama. here.

1 Islamic Arabic greeting meaning “May peace be upon you”

ii. tok and wan2 weren’t buried near you, four minute drive up the road, their graves are at the newer mosque, the ones with pathways between the plots, and carpets of fern green grass. the kembojas were bare last time i came to see you, but the kenanga tree at the head of your grave had between its leaves sprouted starfish flowers of chartreuse — i plucked one with seven soft tendrils, to hold something to bring something back with me on the five hour drive home. before i left, abang3 brought me to them, i kneeled and read their names, touched their headstones like i do yours and tried to feel something more than vacant. tok spent her last days calling out for you and your brother, in the house of her youngest, remaining child, where she slowly lost her mind. she never found her way back to you. when i lowered the flower and its seven soft tendrils to nestle under her carved name and the dates that marked her beginning and end — that compulsion felt divine. in that moment, years and years after both of your deaths, i felt a flicker of duty, your daughter, her granddaughter with something to pass on —

iii. not long after you died, kakak4 stopped praying. once i was older, i thought this would have happened anyway — kakak stopped doing a lot of things after you died. but for this, she told me why she told me that in the weeks after for subuh, zohor, asar, maghrib, isya’ 5 when she reached the final rakaat 6 and got up from her sujud, 7 she would see you in front of her and it made her scared. she didn’t think it was you — didn’t know whether it meant well or was malicious, and she didn’t know what to think if it was you, what you might have had to say, what it meant that you maybe weren’t really gone. the story scared me too but more than that, it made me jealous — i waited for you in my dreams, wanted you to visit, but you never came, 21 years and i never dreamed of you. so there was once a time where i thought, if praying called you, or something like you, to me — i wanted to see.

4 older sister 5 the five daily Islamic prayers 6 final cycle of prayer 7 to bow, prostrate on the prayer mat or ground

iv. home — in all states, all towns, all countries, all times — home has a big steel pot on the stove, wherever it lives in the belly of the house, the bottom blackened and pockmarked, like a weary battered asteroid. put these in the pot — ikan kembung, ikan selayang, belacan, bawang merah, cili kering, asam keping, bunga kantan, daun kesum — satu ikat.8 wait for the fishes’ flesh and bones, the aromatics and the spices and the herbs, to melt and mulch into thick gravy just like you used to make. let the hours pass and wait for the broth to bubble and steam and fill up the house to beckon the family in to eat to call them home to stay. 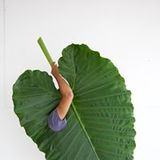