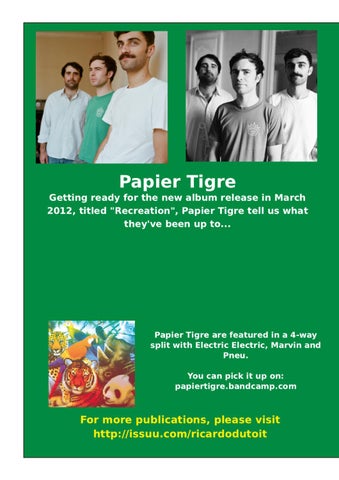 Getting ready for the new album release in March 2012, titled &quot;Recreation&quot;, Papier Tigre tell us what they&#39;ve been up to...

Papier Tigre are featured in a 4-way split with Electric Electric, Marvin and Pneu. You can pick it up on: papiertigre.bandcamp.com

How did the band form? What&#39;s your album of the year? We&#39;ve known each other for years, met when we Pneu &quot;Highway to Health&quot; is killer ! You should were kids and learn how to play music together. check them out if you don&#39;t know them. We played in several bands together before going to university in different cities. We got back - Would you like to come to Portugal? together to form Papier Tigre in early 2006 and We&#39;re actually coming to Braganza at Liveconcept decided to try and do it full time at the end of 2007 on Wednesday, December 1 4th 201 1 with our when we first left for a European tour. It has been friends from Papaye. It will be our first time in working pretty good up until now. Portugal as a band . But it&#39;s unfortunately the only gig we&#39;ll play there. We&#39;d love to come again and What have you been up to lately? play a few gigs. We did a small tour of France with Mike Watt and The Missingmen in late October, which was great. They&#39;re very nice people playing great music. &quot;Recreation&quot; will released on March 1 st, 201 2 It was very happening as Mike would say. You can visit Papier Tigre at their Facebook More recently we worked on and did a few shows page at: with a quadraphonic project we have with friend http://www.facebook.com/papiertigre bands Marvin, Pneu and Electric Electric. It&#39;s basically a show with the 4 bands on 4 different stages in square playing all at the same time. Some pieces have been written all together and songs of each band have been adapted also. Design &amp; Interview: Rick We&#39;re right now working on the cover of our next Photos courtesy of: Jerome Blin - Collectif album to come. Bellavieza Tell us more about your new album, &quot;Recreation&quot;. We recorded our new album last summer. The recording process went very well as we worked in a great studio, Electrical Audio in Chicago, with a great engineer/producer John Congleton. The idea of this album is based on &quot;Recreation&quot; as leisure. The album before called &quot;The Beginning And End Of Now&quot; had a different concept based on immediacy. But it&#39;s really up to the listener to give meaning (or not) to the music, the words and the album name as a whole. The first one is just the 8 songs we liked better from those we wrote at that time. It was supposed to be demos in the first place. If your music were to be adapted into film, what story would it tell? The story of people who like music and life and try to have a great time and respect their friends and the nice people they meet around even if they know that the world is which they live is going wrong. 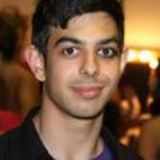