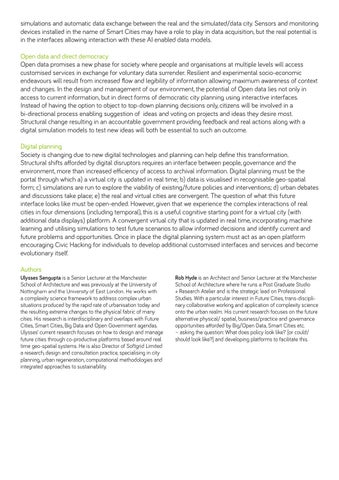 simulations and automatic data exchange between the real and the simulated/data city. Sensors and monitoring devices installed in the name of Smart Cities may have a role to play in data acquisition, but the real potential is in the interfaces allowing interaction with these AI enabled data models. Open data and direct democracy Open data promises a new phase for society where people and organisations at multiple levels will access customised services in exchange for voluntary data surrender. Resilient and experimental socio-economic endeavours will result from increased flow and legibility of information allowing maximum awareness of context and changes. In the design and management of our environment, the potential of Open data lies not only in access to current information, but in direct forms of democratic city planning using interactive interfaces. Instead of having the option to object to top-down planning decisions only, citizens will be involved in a bi-directional process enabling suggestion of ideas and voting on projects and ideas they desire most. Structural change resulting in an accountable government providing feedback and real actions along with a digital simulation models to test new ideas will both be essential to such an outcome. Digital planning Society is changing due to new digital technologies and planning can help define this transformation. Structural shifts afforded by digital disruptors requires an interface between people, governance and the environment, more than increased efficiency of access to archival information. Digital planning must be the portal through which a) a virtual city is updated in real time; b) data is visualised in recognisable geo-spatial form; c) simulations are run to explore the viability of existing/future policies and interventions; d) urban debates and discussions take place; e) the real and virtual cities are convergent. The question of what this future interface looks like must be open-ended. However, given that we experience the complex interactions of real cities in four dimensions (including temporal), this is a useful cognitive starting point for a virtual city (with additional data displays) platform. A convergent virtual city that is updated in real time, incorporating machine learning and utilising simulations to test future scenarios to allow informed decisions and identify current and future problems and opportunities. Once in place the digital planning system must act as an open platform encouraging Civic Hacking for individuals to develop additional customised interfaces and services and become evolutionary itself. Authors Ulysses Sengupta is a Senior Lecturer at the Manchester School of Architecture and was previously at the University of Nottingham and the University of East London. He works with a complexity science framework to address complex urban situations produced by the rapid rate of urbanisation today and the resulting extreme changes to the physical fabric of many cities. His research is interdisciplinary and overlaps with Future Cities, Smart Cities, Big Data and Open Government agendas. Ulyssesâ&#x20AC;&#x2122; current research focuses on how to design and manage future cities through co-productive platforms based around real time geo-spatial systems. He is also Director of Softgrid Limited a research, design and consultation practice, specialising in city planning, urban regeneration, computational methodologies and integrated approaches to sustainability.

Rob Hyde is an Architect and Senior Lecturer at the Manchester School of Architecture where he runs a Post Graduate Studio + Research Atelier and is the strategic lead on Professional Studies. With a particular interest in Future Cities, trans-disciplinary collaborative working and application of complexity science onto the urban realm. His current research focuses on the future alternative physical/ spatial, business/practice and governance opportunities afforded by Big/Open Data, Smart Cities etc. â&#x20AC;&#x201C; asking the question: What does policy look like? [or could/ should look like?] and developing platforms to facilitate this. 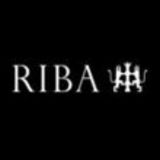