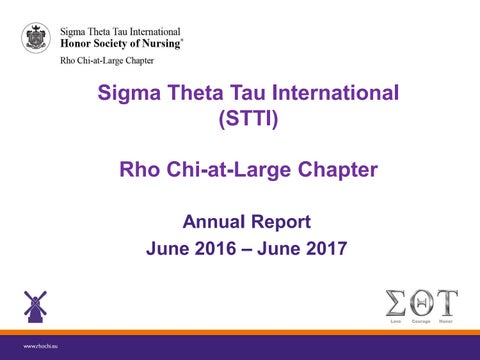 Welcome Welcome to this annual report of the Dutch Chapter Rho Chi- at Large , from June 2016 untill June 2017. This report is in English & contains a summary of the activities of the chapter, the european region and STTI globally. There are many hyperlinks to our website in Dutch for further information. Summary: Each year the chapter organises different lectures. joins conferences and organises an induction with symposia. Last year there was a new mentoring program for members. The chapter works on PR with the presentation tables at conferences and on social media.We also contributed to the STTI Foundation of Nursing. The chapter year did start in juni â&#x20AC;&#x2122;16, after a special European Conference STTIEC16. The Rho Chi-at-Large has organised different activities e.g lectures, meetings, symposia etc.

In November we installed twentyfive new members. After the installation there was a mini symposium about Leadership in Nursing. With lectures from Professor Anne Marrie Raferty,Prof. Dr. Hester Vermeulen and Dr. ThĂłra Hafsteinsdottir. The Friend of Nursing Award was given to Dr Lucien Engelen. We also organised the chapter diner in the Senaatszaal.

In the meantime the PR committee wrote a new policy, the membership recruitment committee is working on a strategic plan and members could be a mentor or mentee in the mentoring route. We were also active on the Circle platforms were we have realized a workgroup for the Board, Membership recruitment and PR communications. 2016- 2017 was also a change for the chapterboard, three boardmembers stopped after many years. President Marie Louise Luiking

Our Mission STTI mission and vision

Our Vision The global organization of choice for nursing

Rho Chi- at- Large is affiliated with

Caring for Elderly People Conference Rotterdam 4-8 Oktober 2016 European Nursing Conference Rho Chi was a sponsor to this conference . We provided a symposium platform for RhoChi members to present. The title of the symposium was: Nursing Leadership in clinical practice: what does it mean for Elderly Care ? Presentors were Dr. Annemarie de Vos over: 'Optimal care for elderly in transition' and Dr Bianca Buurman: 'Lost in Transition‘

with 149 active chaptermembers on the circle

RhoChi-at-Large 2017 membership is open. Application forms can be found on the website.

Installment of New Members for 2017 will be held on the 29th of November at the Academiegebouw, Utrecht. .

Many thanks to those boardmembers who stopped their acitivities.in Januari 2017, Bianca, Roelof and Catharina. See more about the members at the webiste

European Regional Committee Has been successful in submitting an abstract for the 44th Biennial Convention (28 October - 01 November 2017). The title of the work is European Influencing through action in the European Region and beyond. The activities and achievements of the Region would not be possible without the support and participation of the Regional Committee comprising of all the Chapter Presidents, and chairs of the four committees and task force

Postgraduate Research Student Virtual Scholarly event "Nursing and midwifery research across Europeâ&#x20AC;&#x153; A European videoconference to present and discuss PhD research was held on the 16 November 2016, 12:00 â&#x20AC;&#x201C; 14:00 (GMT)Venue: Room 104 Haldane Building, Swansea Campus.Video link to SDP and live streaming were available. The next event in this calendar will be next November 2017 and will be organised by Tau Omega chapter in Sweden.

A member of Upsilon Xi-at-Large Chapter, Professor Anne Marie Rafferty, Professor of Nursing Policy at the Florence Nightingale Faculty of Nursing & Midwifery, King's College London was awarded this honour at the Research Congress in Cape Town, South Africa. Professor Rafferty was recognised for her world leading research programme, most recently with regard to staffing levels and patient outcomes.

European Nurse Recognition Award (ENR Award) This regional award was established to recognise scholarship activity that fosters the development and/or research in nursing and is of relevance to practice and peopleâ&#x20AC;&#x2122;s health across the European region. There were six nominations and the award winner for 2016 was Eileen Richardson, secretary of Phi Mu Chapter for her sustained programme of work spread across several countries in developing nursing education and nursing practice in the field of transcultural nursing.

Celebrating Nursing Excellence Launch of Irelandâ&#x20AC;&#x2122;s own SIA Society: The newly established SIA Society held their very first Inaugural Induction Ceremony at Brookfield Health Sciences Complex, University College Cork on Thursday 17th of November 2016. The SIA Honor Society of Nursing and Midwifery, is a prelude Chapter of Sigma Theta Tau International (STTI) Honor Society of Nursing and is the first of its kind in Ireland. STTI is a long established global organisation for nursing and midwifery leaders with members in over 90 countries. This SIA Honor Society initiative involves collaboration between Schools and Departments of Nursing and/or Midwifery in University College Cork, Waterford Institute of Technology, the Institute of Technology in Tralee; as well as the Nursing and Midwifery Planning and Development Unit of the Cork/Kerry region.

Over 50 new members joined the Society in a well-attended evening of celebration. This society plans to provide support to its members by holding Master Classes, providing networking opportunities, career development opportunities and conferences throughout the year. President of the Society, Dr. Elizabeth Weathers spoke of the exciting plans for the future all centred on the goals and vision of the Society - to unite nurses and midwives working in all settings and nurture a culture of support, comradery and solidarity amongst members of the profession.

GAPFON European Regional The staff at Sigma Theta Tau International (STTI) has been busy pulling all of the data collected from the meetings into a comprehensive report. As you can imagine from the detail collected just at your regional meeting, summarizing such information from seven regions/eight meetings has been a daunting task. However, with recent input from the GAPFON core group, we are very close to finalizing the report, with a goal of launching it in a web-based electronic format. This launch will coincide with STTI’s 28th International Nursing Research Congress in Dublin, Ireland, 27 July-1 August, 2017. Another communication informing you about where the report can be accessed will be sent to you in July. 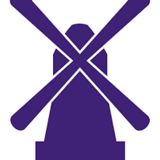 Welcome to this annual report of the Dutch Chapter Rho Chi- at Large , from June 2016 untill June 2017. This report is in English & contai...

Welcome to this annual report of the Dutch Chapter Rho Chi- at Large , from June 2016 untill June 2017. This report is in English & contai...