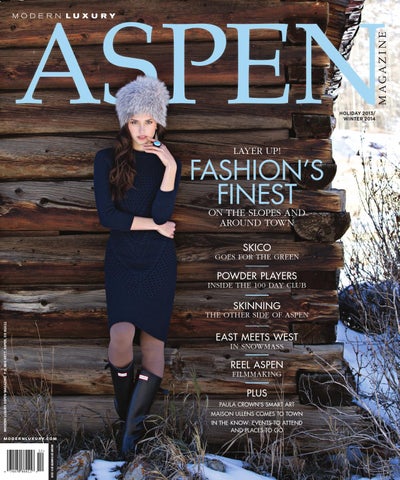 FASHION’S FINEST ON THE SLOPES AND AROUND TOWN SKICO

GOES FOR THE GREEN

THE OTHER SIDE OF ASPEN

PLUS PAULA CROWN'S SMART ART MAISON ULLENS COMES TO TOWN IN THE KNOW: EVENTS TO ATTEND AND PLACES TO GO

heart of the home The rustic white cabinetry and rich soapstone in Rob Sinclair’s open-format kitchen add a certain charm to the space’s contemporary interior architecture.

back to the land Architect Robert Sinclair and his family live large in a small yet efficient Old Snowmass farmhouse. By Kate Abney Photography by Pat Sudmeier

Some time after college, Rob Sinclair jetted off to Aspen for what he intended to be a year of recreation. But, like many who came before him, he never quite left. More than 20 years later, the California native’s award-winning local firm, Robert G. Sinclair Architecture Inc., has grown to include commercial and residential projects not only in Aspen, but also Chicago, Montana, Georgia and even Myanmar. Yet when it came time for Sinclair to finally build a dream home for himself, wife Heather and their 5-year-old twins, Belle and RC, his approach was delightfully dialed back. “After having played the Aspen rental shuffle for so many years, we wanted a place that just felt like home,” he says, recounting the years spent around the area, including Red Mountain. The couple acquired 1,500 acres of ranch land in the idyllic Old Snowmass countryside, approximately 20 minutes from town, and in the fall of 2012 completed the stableinspired structure, Alpine Ranch. Humble by many accounts, the 2,000-square-foot farmhouse exudes a certain restrained elegance. Nestled into the rural hills like a cottage in the Scottish Highlands, the structure gives the appearance that it has resided there for decades. It also boasts jaw-dropping views of Mount continued… Sopris, best spied from the breakfast nook on 196 aspen holiday 2013/ winter 2014

…continued the main floor. Numerous cows and horses roam this picturesque land—most notably the twins’ two new ponies, Twinkie and Unicorn. “We get two of everything,” Sinclair says with a laugh. Come winter, a layer of soft powder envelopes the property like a blanket, and the hills surrounding it—steep, but not too steep—provides the perfect place for the family to enjoy frequent Sunday sledding parties. Embracing Aspen’s beautiful scenery and crisp climate is something Sinclair’s firm does with all of its clients. His own home is no different; on the back, Sinclair installed a covered terrace with a barbecue and ample outdoor living amenities. The spot is an ideal vantage point to admire one of the finest hallmarks of his firm’s design: site-appropriate salvaged materials. In this case, that included native Colorado moss rocks, reclaimed barnwood, a reclaimed slate roof and even 18th century French carved limestone captured from a recent teardown. These features slope into an elegant gambrel roof that fits the architectural vernacular of the region—with a twist. We wanted to make it unique,” Sinclair explains. “We could have done a normal gabled roof, but because the house is

small, we wanted that extra character.” The distinctive form also dictated the interesting angles of the interior architecture, which cradle the open-format living-and-dining spaces on the main floor while creating a sense of volume that makes the most of the home’s small square footage. The contemporary angles also serve to sharpen the slightly more traditional decor beneath. “The space is cozy, but not cramped,” Sinclair says. “It was intended to be a place for our kids to make memories. It’s just right for us.” Though the home can be easily converted into a caretaker’s apartment over a three-car garage during future renovations, presently it contains several finished rooms on the lower level, including a mudroom, study, bedroom and Jack-and-Jill bathroom, plus a playroom for the kids. “We added a great chalkboard wall downstairs, and they love to do their ABCs there,” adds Sinclair. He commissioned Aspen artist Colleen Clare-Irvin to make an intricate chalk drawing of nearby Maroon Bells at the top. In fact, each of his and Heather’s interior design decisions were made with the children in mind, necessitating durable finishes and enduring decor. “We kept the palette pretty subtle. There are some rich continued… 198 aspen holiday 2013/ winter 2014

display space From top to bottom: The view from the kitchen, enhanced by vintage Black Forest antler mounts sourced from renowned collector Jeff Gorsuch; in the stair hall, a backdrop of weathered oak serves as a canvas for collaged artwork. The pictures are a blend of family portraits, equine imagery, landscapes of favorite destinations and vintage ski photos by Ray Atkeson, and are accented by a massive mirror from Aspen Design Works.

…continued brown tones in the floors and furniture, including a sofa and dining table we already owned,” says Sinclair. Two 18th century French chandeliers from a previous home preside above both the living and dining areas, while the vibrant red barstools in the kitchen were a dupe of a midcentury modern set he found on 1st Dibs. But after envisioning his little ones destroying the leather, Sinclair found a less-precious version from allmodern.com that he could replace as needed. Beyond cheery splashes of red, mementos from the couple’s extensive world travels—to Mexico, Milan, Myanmar and beyond—inject extra personality. (Visitors often comment on the sculptural Burmese alms pots over the kitchen’s upper cabinets.) Yet, the aesthetic of the Sinclairs’ home remains grounded in classic Aspen style. “We live in the mountains, so we wanted it to have an Alpine flair,” Sinclair says. “We tossed in lots of faux fur throws, faux fur pillows, a New Zealand wool shag rug. We wanted to continue to warm up what was already a warm and inviting 200 aspen holiday 2013/ winter 2014

environment.” Subtle luxuries can be seen throughout, from Frette linens and Waterworks fixtures to the Carrara marble and simple subway tile in the master bath. In the kitchen, the backsplash features a gleaming stainless steel basketweave tile—a clever foil for the farmhouse-inspired, creamy-white cabinetry and butcher-block countertops. Counting the thoughtful selections for materials and decor, the most constant concern for the couple was to keep the environment personal—whether that meant original art or school craft projects on prominent display. “We’ve got photos all over the walls, from trips we took before we had kids to family pictures of all of us together,” Sinclair relays. “We just returned from a trip on Sunday, and the children didn’t even get out of their jammies all day. They just wanted to hang out. Hopefully, that’s a kind of ‘mission accomplished’ moment for the design of our home.” A 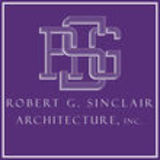