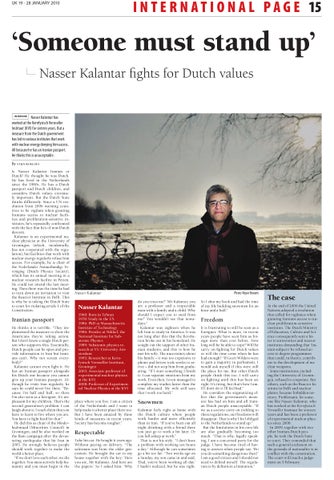 |  i n t e r v i e w   |  Nasser Kalantar has worked at the Kernfysisch Versneller Instituut (KVI) for sixteen years. But a measure from the Dutch government has led to various institutes that work with nuclear energy denying him access. All because he has an Iranian passport. He thinks this is unacceptable. By stijn roelofs Is Nasser Kalantar Iranian or Dutch? He thought he was Dutch. He has lived in the Netherlands since the 1980s. He has a Dutch passport and Dutch children, and considers Dutch values extremely important. But the Dutch State thinks differently. Since a UN resolution from 2006 warning countries to be vigilant when granting Iranians access to nuclear facilities and proliferation-sensitive institutes, he’s repeatedly confronted with the fact that he’s of non-Dutch descent. Kalantar is an experimental nuclear physicist at the University of Groningen (which, incidentally, has not cooperated with the regulation), but facilities that work with nuclear energy regularly refuse him access. For example, he is chair of the Nederlandse Natuurkundige Ve­ reniging (Dutch Physics Society), which has its annual meeting in a nuclear research facility in Petten. He could not attend the last meeting. Then there was the time he had to turn down an invitation to visit the Reactor Institute in Delft. This is why he is taking the Dutch State to court for violating article 1 of the Constitution.

Iranian passport He thinks it is terrible. “They implemented the measure to show the Americans they’re taking action. But I don’t know a single Dutch person who supports this. Essentially, Dutch people can be spies and provide information to Iran but Iranians can’t. Why not screen everybody?” Kalantar cannot even fight it. He has an Iranian passport alongside his Dutch one because you cannot give up your Iranian passport. Although he visits Iran regularly, he says he could never live there. “Because I’m half and half, so there I’m also seen as a foreigner. It’s unpleasant for my children. That’s the second generation’s problem. I can laugh about it. I teach them that you have to learn to live where you are. You have to fight hard for that.” He did this as chair of the Minder­ hedenraad (Minorities Council) in Groningen, and he also worked on the Bam campaign after the devastating earthquake that hit Iran in 2003. He strongly believes people should work together to make the world a better place. “If we don’t love each other, we die together. You must actively help humanity and you must begin in the

Nasser Kalantar 1960: Born in Tehran 1978: Study in the US 1986: PhD at Massachusetts Institute of Technology 1986: Postdoc at Nikhef, the National Institute for Sub­ atomic Physics 1989: Subatomic physics re­ search at VU University Am­ sterdam 1993: Researcher at Kern­ fysisch Versneller Instituut, Groningen 2003: Associate professor of experimental nuclear physics at the KVI 2008: Professor of Experimen­ tal Nuclear Physics at the KVI place where you live. I am a citizen of the Netherlands and I want to help make it a better place there too. But I have been amazed by these kinds of measures in recent years. Society has become tougher.”

Respectable Take his car. He bought it years ago. Without paying on delivery. “The salesman was from the older generation. He brought the car to my house together with the key: ‘Here you are, Mr Kalantar. And here are the papers.’ So I asked him: ‘Why

do you trust me?’ ‘Mr Kalantar, you are a professor and a respectable man with a family and a child. Why should I expect you to steal from me?’ You wouldn’t see that nowadays.” Kalantar was eighteen when he left Iran to study in America. It was not long after this that the Revolution broke out in his homeland. He sought out the support of other Iranian students, and this is how he met his wife. The uncertainty about his family – it was too expensive to phone and letters took weeks to arrive – did not stop him from graduating. “If I start something I finish it. I can separate emotions from my work. Even then. I even managed to complete my studies faster than the time allocated. My wife still says that I work too hard.”

Snowmen Kalantar feels right at home with the Dutch culture where people work harder and more efficiently than in Iran. “If you’ve been out all night drinking with a friend there you just go to work a bit later. Or you fall asleep at work.” That is not his style. “I don’t have a problem with working ten hours a day.” Although he can sometimes go a bit too far: “Two weeks ago on a Sunday, my son came in and said, ‘Dad, you’ve been working all day.’ I hadn’t realized, but he was right.

So I shut my book and had the time of my life building snowmen for an hour and a half.”

Freedom It is frustrating to still be seen as a foreigner. What is more, in recent years people have seen him as foreign more than ever before. How long will he be able to cope? Will he carry on fighting for Dutch values or will the time come when he has had enough? “If Geert Wilders were to gain a majority in parliament, I would ask myself if this were still the place for me. But other Dutch people think this too. I will carry on fighting until this has been set right. It’s tiring, but that’s how I am. If I don’t do it I’ll feel bad.” He considers the stigmatizing effect that the government’s measure has had on him and all Iranian Dutch people unacceptable. “If we as a society carry on yielding to these regulations, our freedoms will disappear. That is why I feel obliged to the Netherlands to stand up.” But the limitations in his own life are also gradually becoming too much. “That is why, legally speaking, I am a concerned party for the judge. I have become tired of having to answer when people say: ‘Do you do something dangerous then?’ I am a good citizen and I should not need to defend myself. The regulation is by definition a limitation.”

The case At the end of 2006 the United Nations adopted a resolution that called for vigilance when granting Iranians access to nuclear proliferation-sensitive institutes. The Dutch Ministry of Education, Culture and Science consequently sent a letter to universities and reactor institutes demanding that ‘Iranian subjects’ be refused access to degree programmes that could, in theory, contribute to the development of nuclear weapons. Some institutions, including the University of Groningen, refused to cooperate. But others, such as the Reactor Institute in Delft and nuclear plants, became forbidden territory. Problematic for someone like Nasser Kalantar, who has worked at the Kernfysisch Versneller Instituut for sixteen years and has been a professor of experimental nuclear physics since 2008. In 2009, together with two other Iranian-Dutch people, he took the Dutch State to court. They contended that such a general exclusion on the grounds of nationality is in conflict with the constitution. The court will reach a judgement on 3 February. 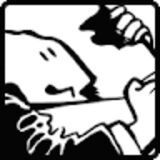 Independend weekly for the University of Groningen, The Netherlands - English issue

Independend weekly for the University of Groningen, The Netherlands - English issue