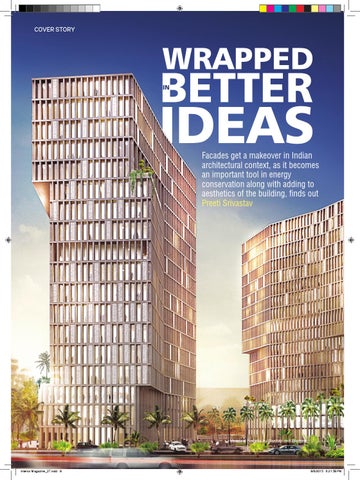 Facades get a makeover in Indian architectural context, as it becomes an important tool in energy conservation along with adding to aesthetics of the building, finds out Preeti Srivastav

he exterior of the building is the most important form structurally and functionally as it adds to the architectural aesthetics and affects the performance of the envelope and interiors of the building. The ever-evolving technology is adding more to the scope of architects to experiment with newer ideas and designs. Architects too are leaving no stone unturned in trying out different combination of technology, material and design to come up with innovative facades that are now serving a greater purpose like conservation of energy and eliminating costs by reducing load on HVAC.

Facades are now a dynamic part of buildings that respond to climatic changes in various ways. It is not only feasible but imperative that intelligent facades be evolved for buildings in India. “While the intelligent facade systems are expensive to install and create, however, if done intelligently they can substantially reduce the heat gain thereby saving on energy costs. Within a few years, the energy saving equals the cost of the additional façade design and thereafter creates gains for the building by saving on energy costs lifelong,” says Ar. Sanjay Puri, Principal Architect, Sanjay Puri Architects.

Apart from mere aesthetics, the stress on energy efficiency pushes facades to act as regulators of interior temperatures. The advancement in virtual technology such as AutoCAD and Revit makes it easier to design free-flowing and creative facades. Ar. Reza Kabul, Director, ARK–Reza Kabul Architects Pvt. Ltd. says, “With sustainability becoming the key element in the built environment, self-sustaining projects such as our 96 Iconic Towers are designed with photovoltaic cells in the domed roof which helps generate electricity for the structure. Suggestions are also being made to the HVAC Consultants to use the multi-storey parking facade and natural atmospheric pressure to lower the temperature of the water for the air-conditioning plant instead of using large fans. Aesthetically too, the availability of options in materials for facades has increased with varied options such as natural and artificial stones, concrete panels, terracotta ceramic panels, metal panels, and, of course, glass.” While the concept of artificially intelligent facades is yet to catch up big in India, experts suggest that the country is

ready for it. “The facades of the future are highly adaptable to their environment and closely intermingle form and function and quite feasible for India. Due to rough climate conditions in this country, the adaptive facades are of high importance. However, maintenance friendly solutions are more important than technical aspects,” explains Hartmut Wurster, Country Head, Blocher Blocher India Pvt. Ltd. Superior façade design and engineering bears an influence on factors such as heat and light gain, wind load and controls external elements that may have an impact on the performance of the building. To demonstrate the environmental potentials of the façade system, rat[LAB] made a demonstration on an existing high-rise in New Delhi – Gopal Das Bhawan located in Connaught Place. “Since the convexshaped frontal of building faces southwest, it receives a major component of light and heat (solar gain) from this side of the façade. The CMF System (Cellular Morphology Façade) is digitally retrofitted on south-west façade of the tower and consists of multiple unique

components of hexagon topology. The hexa-grid system is controlled through an algorithm that alters its density and attraction during the concept design stage. Six prominent functional zones are speculated as attractor points on the façade that become the first parameter of control and solar insolation analysis on existing s/w façade becomes the second guiding parameter. With new morphology of this retrofitted façade, local angular variations are introduced that can redistribute the sunlight in a differentiated manner on the building envelope. This can potentially change the way building is heated up and gets daylight in the interior spaces. Light, heat and visibility of interior space can now be optimised as per user requirements, adding a locally embedded intelligence in the new façade geometry,” elaborates Sushant Verma, Co-Founder, rat[LAB].

Experts feel that though inceptive, there is immense potential for adaptive facades in India. Facades can now be designed to manipulate heat gain and natural ventilation based on diurnal and seasonal changes in response to sun movement and direction of wind. Talking about the technology and materials used in India, Ar. Kabul states, “Façades today are designed with a lot of research and study. Sun path analysis is conducted to ensure selection of the right type of glazing. Spandrel panels are designed in ways to avoid glare. In some

cases sun-breakers are integrated in the façade to cut out the heat and allow diffused light to pass through the glass. Double skin façades, parametric designs, LED facades, and rain screen facades are also seen in few projects. While there are several materials that are and can be used as façades, glass and stone cladding HARTMUT WURSTER is what is seen often across India. I also see a rise in aesthetics in façades and elevations.” A market survey reveals that efforts have been made by various organisations to popularise sustainable construction practices. Developers are showing strong commitment to deliver advanced designs without drastically increasing budgets. Steps like increased day lighting, incorporation of structural glass, reusable/ recycled materials for minimum wastage at the initial phases of design take us towards better future. Going by the available data, on an average, buildings around the world consume 40 percent

Mondeal Square by Blocher and Blocher

Superior façade design and engineering bears an influence on factors such as heat and light gain, wind load and controls external elements that may have an impact on the performance of the building

Zen building by Blocher and Blocher

of primary energy and generate 33 percent of carbon emissions. Consumption of heating energy could reduce up to 70 percent through the use of effective thermal insulation Over the last two decades, buildings in India are largely enveloped in glass facades on all sides resulting in increased load on air conditioning. Ar. Puri stresses that ideally less glass should be used on southern, eastern and western sides whilst the northern side should have more glass. “The best suited facade for Indian climate is stone cladding done in a dry wall system since this creates a small air gap and stone does not allow the exterior heat to permeate inside the building. Apart from choosing the right material, it is important that the architectural design should be done in response to the sun direction. Screens made of GRC, fabric, aluminium fins are some of the solutions. Other sustainable solutions include louvers within glass panels, even distribution of vents,” he adds.

Lessons from the past

India’s past is laden with solutions for problems of the present and the future. According to Ar. Puri, the Indian heritage offers some of the best solutions for Indian climate. Stone walls, jaali screens, courtyards, brick walls with screens are some of the elements that

Satya One by Blocher and Blocher

can be imbibed from India’s architectural heritage to create more responsive architecture, which in turn is more energy efficient and sustainable. Highlighting the importance of clubbing vernacular architecture with modern technology and material, Verma says that there is no harm is using conventional materials but in a smarter way. “This would add to performance and also to aesthetics. One might use bricks to create angular variation in configuration wherein one can control solar gain and hence alter the performance of a building. This would be a smart use of a primitive material. Structural and environmental performance should be the main evaluation criteria for any façade,” opines Verma. Facade detailing is a further addition that may be incorporated to make the design even more sustainable. Wurster adds that India offers a lot of opportunities to experiment with different material and technology in facades. “Traditional building techniques have proven to be valid in their aesthetical simplicity and functional value. On the other hand, new material often has precious surplus values. The aim should be to make facades simpler by reducing the complexity of the systems and create building envelopes that react according to their environment,” he says.

Influence of globalisation on India

Globalisation certainly affects architectural profession too and one should make use of this exchange and interaction. While imitating may not be a great idea, learning newer technologies and adapting then to our needs is a smarter move. “There is a resistance to use of computation in the industry in India due to a number of myths such as higher costs. There is a

INDIA READY FOR CHANGE? K.R. Suresh, Regional Director, Axis Facades Pvt. Ltd. highlights multiple factors that withhold Indian clients from accepting and implementing adaptive facades. “Though India is quite ready to have a revolution in facades, however, some factors like finance, cultural influence and education hold us back.” Finance: This is a prominent issue. The initial costs required for installing adaptive façade serves as a deterrent, but it is important to note that in the long-term, savings from low energy consumption far outweighs the initial investments. For this, the investors need to have a long-term vision. Media and cultural influence: The developers are not too open to experimentation. They would rather give in to the same old ‘in-trend’ glass buildings to the MNCs. In western countries, such buildings are built with strict specifications in terms of material and technology, but in India as lot is comprised under cost-cutting. Education: The curricula of architecture schools in India are unfortunately not updated to address the current architectural needs. There are newer technologies and newer challenges to meet. Blindly aping the west is just not a good idea.

preconceived notion that using computation would be more expensive in India and we are trying to break this notion by putting ‘cost optimisation’ as the primary criteria in all our projects. If getting influenced by international practices is benefiting us, then there is no harm in it,” puts Verma. Talking about the influence of western architecture on India, Ar. Kabul says, “One way of looking at it is that they are time-tested designs; but whenever we take an influence from any other region, it is essential that we look at our end use. The local climate, feasibility, and its repercussions need to be considered.” Wurster brings in the two-dimensional aspect which states that getting influenced is normal and not only India but other nations too are getting influenced by good things, irrespective of its roots. “There is a growing use of ornamental elements in European countries which have a rich tradition in India. Or, on the other hand, the highly modern buildings in India that can easily compete with all those innovative buildings around the world are finest example of mutual influence.” A macro look at the changes in the industry presents an optimistic picture for future of facades in India, as architects are trying out vernacular architectural techniques along with new technologies to get best-suited facades. 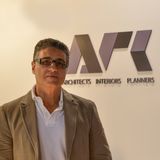