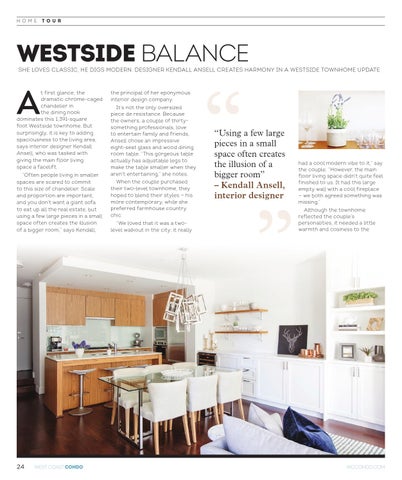 “Often people living in smaller spaces are scared to commit to this size of chandelier. Scale and proportion are important, and you don’t want a giant sofa to eat up all the real estate, but using a few large pieces in a small space often creates the illusion of a bigger room,” says Kendall,

the principal of her eponymous interior design company. It’s not the only oversized piece de resistance. Because the owners, a couple of thirtysomething professionals, love to entertain family and friends, Ansell chose an impressive eight-seat glass and wood dining room table. “This gorgeous table actually has adjustable legs to make the table smaller when they aren’t entertaining,” she notes. When the couple purchased their two-level townhome, they hoped to blend their styles — his more contemporary, while she preferred farmhouse country chic. “We loved that it was a twolevel walkout in the city; it really

t first glance, the dramatic chrome-caged chandelier in the dining nook dominates this 1,391-square foot Westside townhome. But surprisingly, it is key to adding spaciousness to the living area, says interior designer Kendall Ansell, who was tasked with giving the main floor living space a facelift.

had a cool modern vibe to it,” say the couple. “However, the main floor living space didn’t quite feel finished to us. It had this large empty wall with a cool fireplace — we both agreed something was missing.” Although the townhome reflected the couple’s personalities, it needed a little warmth and cosiness to the

West Coast Condo is the only publication in British Columbia’s Lower Mainland to give readers all the latest local condo market news and analysis, as well as buying, selling, investment and décor advice, plus profiles of new developments. Our experienced editorial team has unique knowledge of the market, and our roster of columnists spans a wide array of respected real estate experts. West Coast Condo offers unmissable, unparalleled insights to all those who are buying, selling, investing or just living in a West Coast condo. 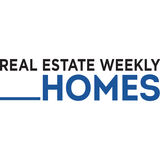