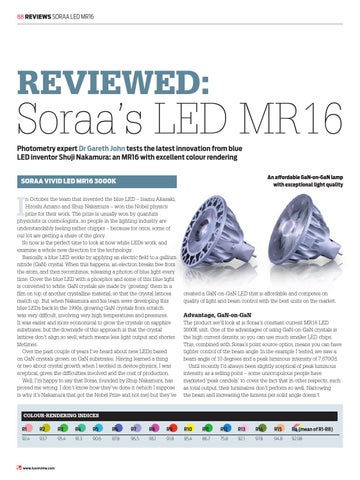 n October the team that invented the blue LED – Isamu Akasaki, Hiroshi Amano and Shuji Nakamura – won the Nobel physics prize for their work. The prize is usually won by quantum physicists or cosmologists, so people in the lighting industry are understandably feeling rather chipper – because for once, some of our lot are getting a share of the glory. So now is the perfect time to look at how white LEDs work, and examine a whole new direction for the technology. Basically, a blue LED works by applying an electric ﬁeld to a gallium nitride (GaN) crystal. When this happens, an electron breaks free from the atom, and then recombines, releasing a photon of blue light every time. Cover the blue LED with a phosphor and some of this blue light is converted to white. GaN crystals are made by ‘growing’ them in a ﬁlm on top of another crystalline material, so that the crystal lattices match up. But when Nakamura and his team were developing this blue LEDs back in the 1990s, growing GaN crystals from scratch was very difﬁcult, involving very high temperatures and pressures. It was easier and more economical to grow the crystals on sapphire substrates, but the downside of this approach is that the crystal lattices don’t align so well, which means less light output and shorter lifetimes. Over the past couple of years I’ve heard about new LEDs based on GaN crystals grown on GaN substrates. Having learned a thing or two about crystal growth when I worked in device physics, I was sceptical, given the difﬁculties involved and the cost of production. Well, I’m happy to say that Soraa, founded by Shuji Nakamura, has proved me wrong. I don’t know how they’ve done it (which I suppose is why it’s Nakamura that got the Nobel Prize and not me) but they’ve

created a GaN-on-GaN LED that is affordable and competes on quality of light and beam control with the best units on the market. Advantage, GaN-on-GaN The product we’ll look at is Soraa’s constant-current MR16 LED 3000K unit. One of the advantages of using GaN-on-GaN crystals is the high current density, so you can use much smaller LED chips. This, combined with Soraa’s point source optics, means you can have tighter control of the beam angle. In the example I tested, we saw a beam angle of 10 degrees and a peak luminous intensity of 7,670Cd. Until recently I’d always been slightly sceptical of peak luminous intensity as a selling point – some unscrupulous people have marketed ‘peak candela’ to cover the fact that in other respects, such as total output, their luminaires don’t perform so well. Narrowing the beam and increasing the lumens per solid angle doesn’t

The latest news, analysis, case studies and how to guides on energy-efficient lighting for hospitality and leisure 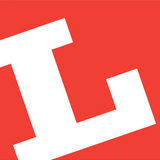