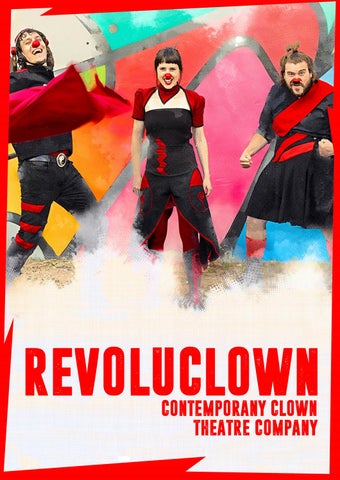 REVOLUCLOWN is a clown show, suitable for all ages, where a group of clowns come to make the revolution creating a true epic, enthusiastic and fun adventure. More than a story, REVOLUCLOWN is an encouragement to find ways to build community through play and joy, a symbolic re-appropriation of space, theatre, the city and even life.

THE SHOW Revoluclown is a Clown show. A creation cared for with special care and care in the design, the characters and the relationship with the public. The dramaturgy is elaborated and designed so that, from the beginning of the show to the end, the audience can immerse themselves in it and live an adventure together with our clowns .

The show and adventure ends with a balloon launch (biodegradabes) after a symbolic question that puts an end to our special Revolution, creating a very emotional moment of intimacy with the public.

REVOLUCLOWN has two formats: Street itinerant or room format. In the hall, after several scenes, the audience is invited to leave the theaThe show has 5 technical stops where we develop tre, carry out a series of actions together with the dramaturgy and involve the audience even more. the clowns to retake the theatre, a symbolic action of re-appropriation of the common spaces.

Street version The show is itinerant. At an agreed point, the three clowns show up. Cardiaco, the leader, idealistic and enthusiastic; Flopi, the strength and passion, and Alzamuros, the primitive and good-natured. The three clown classic archetypes. A series of gags are presented and followed until the public is invited to say why they would make the revolution. The flag is handed to one of the people who has said a reason and the public is harangued into going forward to make revolution. An agreed tour with the organization begins where different scenes (site specific) take place, such as a photo of a revolutionary group, a dance (haka) or stealth and assault missions to invite more people to

join or get the best place to stick the flag. At all times the audience and the environment are interacted with and amused scenes arise. After an epic speech of Flopi raising the public to symbolically take the street as his own, the flag is nailed with the help of the public and we made a vote with balloons (biodegradable). The public is asked if they want to make their lives a revolution. If they say yes, they release the balloons that fly away until they disappear into the horizon. The clowns say goodbye with a last sentence: “And you, what are you waiting for to make your revolution?”

Indoor version The three clowns are on stage. Cardiaco, the leader, idealistic and enthusiastic; Flopi, the strength and passion, and Alzamuros, the primitive and good-natured. The three clown classic archetypes. A series of gags follow one another, until after Flopi’s epic speech he raises the audience to take to the streets and leave the theatre. Outside, the public is invited to say why they make a revolution. The flag is handed to one of the people who has said a reason and the public is harangued into going forward to make revolution. An agreed tour with the organization beginds around the theater where different scenes (site specific) like a photo of a revolutionary group, a dance or an assault

on a shop. At all times, the audience and the environment are interacted with, and amusing scenes arise. Finally, it was decided to return to the theatre to take it and recover it. We go out as spectators and come back as protagonists, because theatre, like life, belongs to us. On stage we try to nail the flag that can only be achieved with the help of the audience (each performance may vary according to their response)... Once nailed down, a series of gags follow one another that fit with the clowns saying goodbye with their last sentence: “And you, what are you waiting for to make your revolution?”?””

FAQ To you, programmer, who are reading this dossier for Is your show for all audiences? the first time, I’m sure you have had a series of questions about us: Totally. It’s a universal spectacle. It works perfectly with both adults and children.

Are you social and political theatre?

We are Flor Della Valle, Óscar Fernández and Jesús Soler and we created this company in 2015. Revoluclown is also the name of our first show. We met while studying clown at the Factoria DIMO (With Carlo Mô and Mr. di) and we have been performing for three years for many festivals and town halls. We have performed at the Mostra de Pallassos de Cubelles, Milan (two weeks in two festivals), Elx al carrer, Inundar’t, Festival Fisures and many more. At all, the reception of the show and programmers has been spectacular.

We’re clowns. We seek to have fun while providing quality entertainment that involves children, youth and adults alike. Without infantilizing or denying the interests of the public. What Revoluclown wants to convey is that any change is in our hands. Faced with the motto “another theatre is possible” we bring our epic clown.

Where does your project come from?

Why should I hire you and what do you contribute?

Because we present an original clown proposal, charged with energy, very funny and symbolic. A true epic We unite because we love the performing arts adventure for all audiences. and because we have always sought different forms of expression. At the time of carrying out our We also add our work in design and audiovisual to work, we bet on a clown who struggles and suadd in diffusion and bring the public closer to each ffers from common affective places, that is, reality. event. This puts us in conflict. The theatre is conflict and without it, there is no change or evolution, without risk there is no innovation and otherwise we only go over what in clown we call the TRUTH of the clown.

You’re a rua? No. Revoluclown is a Clown show that can be touring on the street or in a room. With a dramaturgy elaborated and designed so that, from the beginning to the end, the audience can immerse themselves in it and live the adventure together with our clowns and clown.

the critique “Creation maintains a disoriented capacity for involvement and fun, offering the public the chance to become complicit, to play.” PACC (Magazine di arte & culture Milano) “Revoluclown makes energy your strength. Only with energy can a revolution be made that, you know, is the best possible way of life.” “Addictive. Revoluclown gets the audience involved. With a beautiful red nose to remember that they are clowns and a red flag, they play at pushing the public towards revolution, a revolution that takes us out of the theater. A subtle game of clowns able to entertain and engage.” Spettcolinews.com

Technical - Theatre-Clown show. - Site specific show, adaptable. It can be done entirely on the street (promenade) or indoor (theatre+street). - Family show, suitable for all ages. - Duration: 45’. The duration can be altered according to travel and needs. - Portable speaker with internal battery necessary. 500W peak. - Megaphone necessary - No assembly or disassembly time is required. - The show can be translate to english, portuguese, french, italian or german. - Two people from the organization are required to accompany the company during the performance and to resolve logistical issues.

CV In 2015 we created Revoluclown, also the name of our llvile, Joan Busquets, Leo Bassi, Christian Atanasiu, Lluis first show. This creation has given us the opportunity to Elies, Aitor Basauri, Jesús Jara, Lluna Albert, Javier Villena, be programmed in different and variated, festivals all of David Franch, Arantza López o Maite Guevara. them with a great acceptance by the public of all ages. In the performing arts we also involve audiovisual work, under the label of Concept Art Project (CAP), expanding Our artistic/scenic formation has a career of more than the universe and imaginary clown, making possible a five years and includes clown, gesture, physical theatre, greater diffusion of festivals and cultural programming mask, comedy of art, theater of the oppressed, drama in social networks. We are dedicated to the design and and stage direction with the mastery of great professio- production of audiovisual marketing, web and social nenals such as Carlo Mô i Mr. Di, Virginia Imaz, Jonny Me- tworks for theatre companies. 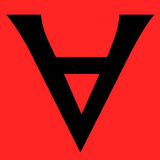