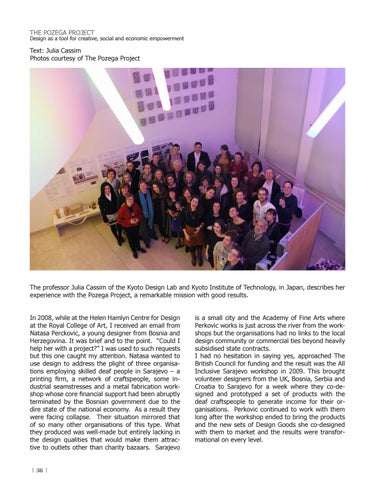 Design as a tool for creative, social and economic empowerment

The professor Julia Cassim of the Kyoto Design Lab and Kyoto Institute of Technology, in Japan, describes her experience with the Pozega Project, a remarkable mission with good results. In 2008, while at the Helen Hamlyn Centre for Design at the Royal College of Art, I received an email from Natasa Perckovic, a young designer from Bosnia and Herzegovina. It was brief and to the point. “Could I help her with a project?” I was used to such requests but this one caught my attention. Natasa wanted to use design to address the plight of three organisations employing skilled deaf people in Sarajevo – a printing firm, a network of craftspeople, some industrial seamstresses and a metal fabrication workshop whose core financial support had been abruptly terminated by the Bosnian government due to the dire state of the national economy. As a result they were facing collapse. Their situation mirrored that of so many other organisations of this type. What they produced was well-made but entirely lacking in the design qualities that would make them attractive to outlets other than charity bazaars. Sarajevo 36

is a small city and the Academy of Fine Arts where Perkovic works is just across the river from the workshops but the organisations had no links to the local design community or commercial ties beyond heavily subsidised state contracts. I had no hesitation in saying yes, approached The British Council for funding and the result was the All Inclusive Sarajevo workshop in 2009. This brought volunteer designers from the UK, Bosnia, Serbia and Croatia to Sarajevo for a week where they co-designed and prototyped a set of products with the deaf craftspeople to generate income for their organisations. Perkovic continued to work with them long after the workshop ended to bring the products and the new sets of Design Goods she co-designed with them to market and the results were transformational on every level.