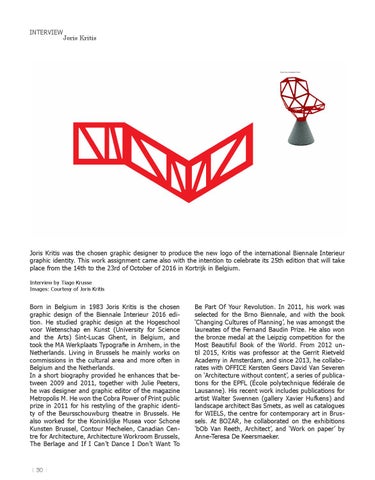 Joris Kritis was the chosen graphic designer to produce the new logo of the international Biennale Interieur graphic identity. This work assignment came also with the intention to celebrate its 25th edition that will take place from the 14th to the 23rd of October of 2016 in Kortrijk in Belgium. Interview by Tiago Krusse Images: Courtesy of Joris Kritis

Born in Belgium in 1983 Joris Kritis is the chosen graphic design of the Biennale Interieur 2016 edition. He studied graphic design at the Hogeschool voor Wetenschap en Kunst (University for Science and the Arts) Sint-Lucas Ghent, in Belgium, and took the MA Werkplaats Typografie in Arnhem, in the Netherlands. Living in Brussels he mainly works on commissions in the cultural area and more often in Belgium and the Netherlands. In a short biography provided he enhances that between 2009 and 2011, together with Julie Peeters, he was designer and graphic editor of the magazine Metropolis M. He won the Cobra Power of Print public prize in 2011 for his restyling of the graphic identity of the Beursschouwburg theatre in Brussels. He also worked for the Koninklijke Musea voor Schone Kunsten Brussel, Contour Mechelen, Canadian Centre for Architecture, Architecture Workroom Brussels, The Berlage and If I Can’t Dance I Don’t Want To

Be Part Of Your Revolution. In 2011, his work was selected for the Brno Biennale, and with the book ‘Changing Cultures of Planning’, he was amongst the laureates of the Fernand Baudin Prize. He also won the bronze medal at the Leipzig competition for the Most Beautiful Book of the World. From 2012 until 2015, Kritis was professor at the Gerrit Rietveld Academy in Amsterdam, and since 2013, he collaborates with OFFICE Kersten Geers David Van Severen on ‘Architecture without content’, a series of publications for the EPFL (École polytechnique fédérale de Lausanne). His recent work includes publications for artist Walter Swennen (gallery Xavier Hufkens) and landscape architect Bas Smets, as well as catalogues for WIELS, the centre for contemporary art in Brussels. At BOZAR, he collaborated on the exhibitions ‘bOb Van Reeth, Architect’, and ‘Work on paper’ by Anne-Teresa De Keersmaeker.