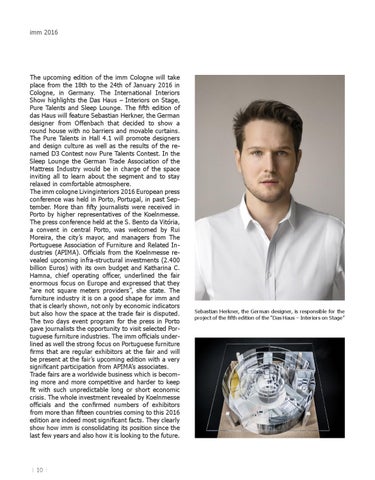 The upcoming edition of the imm Cologne will take place from the 18th to the 24th of January 2016 in Cologne, in Germany. The International Interiors Show highlights the Das Haus – Interiors on Stage, Pure Talents and Sleep Lounge. The fifth edition of das Haus will feature Sebastian Herkner, the German designer from Offenbach that decided to show a round house with no barriers and movable curtains. The Pure Talents in Hall 4.1 will promote designers and design culture as well as the results of the renamed D3 Contest now Pure Talents Contest. In the Sleep Lounge the German Trade Association of the Mattress Industry would be in charge of the space inviting all to learn about the segment and to stay relaxed in comfortable atmosphere. The imm cologne Livinginteriors 2016 European press conference was held in Porto, Portugal, in past September. More than fifty journalists were received in Porto by higher representatives of the Koelnmesse. The press conference held at the S. Bento da Vitória, a convent in central Porto, was welcomed by Rui Moreira, the city’s mayor, and managers from The Portuguese Association of Furniture and Related Industries (APIMA). Officials from the Koelnmesse revealed upcoming infra-structural investments (2.400 billion Euros) with its own budget and Katharina C. Hamna, chief operating officer, underlined the fair enormous focus on Europe and expressed that they “are not square meters providers”, she state. The furniture industry it is on a good shape for imm and that is clearly shown, not only by economic indicators but also how the space at the trade fair is disputed. The two days event program for the press in Porto gave journalists the opportunity to visit selected Portuguese furniture industries. The imm officials underlined as well the strong focus on Portuguese furniture firms that are regular exhibitors at the fair and will be present at the fair’s upcoming edition with a very significant participation from APIMA’s associates. Trade fairs are a worldwide business which is becoming more and more competitive and harder to keep fit with such unpredictable long or short economic crisis. The whole investment revealed by Koelnmesse officials and the confirmed numbers of exhibitors from more than fifteen countries coming to this 2016 edition are indeed most significant facts. They clearly show how imm is consolidating its position since the last few years and also how it is looking to the future.

Sebastian Herkner, the German designer, is responsible for the project of the fifth edition of the “Das Haus – Interiors on Stage”