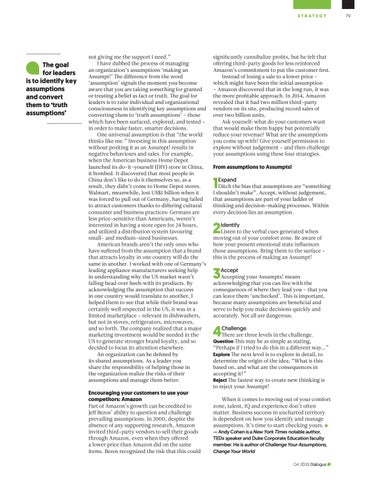 not giving me the support I need.” I have dubbed the process of managing an organization’s assumptions ‘making an Assumpt!’ The diﬀerence from the word ‘assumption’ signals the moment you become aware that you are taking something for granted or treating a belief as fact or truth. The goal for leaders is to raise individual and organizational consciousness in identifying key assumptions and converting them to ‘truth assumptions’ – those which have been surfaced, explored, and tested – in order to make faster, smarter decisions. One universal assumption is that “the world thinks like me.” Investing in this assumption without positing it as an Assumpt! results in negative behaviours and sales. For example, when the American business Home Depot launched its do-it-yourself (DIY) store in China, it bombed. It discovered that most people in China don’t like to do it themselves so, as a result, they didn’t come to Home Depot stores. Walmart, meanwhile, lost US$1 billion when it was forced to pull out of Germany, having failed to attract customers thanks to diﬀering cultural consumer and business practices: Germans are less price-sensitive than Americans, weren’t interested in having a store open for 24 hours, and utilized a distribution system favouring small- and medium-sized businesses. American brands aren’t the only ones who have suﬀered from the assumption that a brand that attracts loyalty in one country will do the same in another. I worked with one of Germany’s leading appliance manufacturers seeking help in understanding why the US market wasn’t falling head over heels with its products. By acknowledging the assumption that success in one country would translate to another, I helped them to see that while their brand was certainly well respected in the US, it was in a limited marketplace – relevant in dishwashers, but not in stoves, refrigerators, microwaves, and so forth. The company realized that a major marketing investment would be needed in the US to generate stronger brand loyalty, and so decided to focus its attention elsewhere. An organization can be defined by its shared assumptions. As a leader you share the responsibility of helping those in the organization realize the risks of their assumptions and manage them better.

Encouraging your customers to use your competitors: Amazon

Part of Amazon’s growth can be credited to Jeﬀ Bezos’ ability to question and challenge prevailing assumptions. In 2000, despite the absence of any supporting research, Amazon invited third-party vendors to sell their goods through Amazon, even when they oﬀered a lower price than Amazon did on the same items. Bezos recognized the risk that this could

significantly cannibalize profits, but he felt that oﬀering third-party goods for less reinforced Amazon’s commitment to put the customer first. Instead of losing a sale to a lower price – which might have been the initial assumption – Amazon discovered that in the long run, it was the more profitable approach. In 2014, Amazon revealed that it had two million third-party vendors on its site, producing record sales of over two billion units. Ask yourself: what do your customers want that would make them happy but potentially reduce your revenue? What are the assumptions you come up with? Give yourself permission to explore without judgement – and then challenge your assumptions using these four strategies.

Listen to the verbal cues generated when moving out of your comfort zone. Be aware of how your present emotional state influences those assumptions. Bring them to the surface – this is the process of making an Assumpt!

Accepting your Assumpts! means acknowledging that you can live with the consequences of where they lead you – that you can leave them ‘unchecked’. This is important, because many assumptions are beneficial and serve to help you make decisions quickly and accurately. Not all are dangerous.

Challenge There are three levels in the challenge.

Question This may be as simple as stating,

“Perhaps if I tried to do this in a diﬀerent way…” Explore The next level is to explore in detail, to determine the origin of the idea. “What is this based on, and what are the consequences in accepting it?” Reject The fastest way to create new thinking is to reject your Assumpt! When it comes to moving out of your comfort zone, talent, IQ and experience don’t often matter. Business success in uncharted territory is dependent on how you identify and manage assumptions. It’s time to start checking yours. — Andy Cohen is a New York Times notable author, TEDx speaker and Duke Corporate Education faculty member. He is author of Challenge Your Assumptions, Change Your World Q4 2019 Dialogue