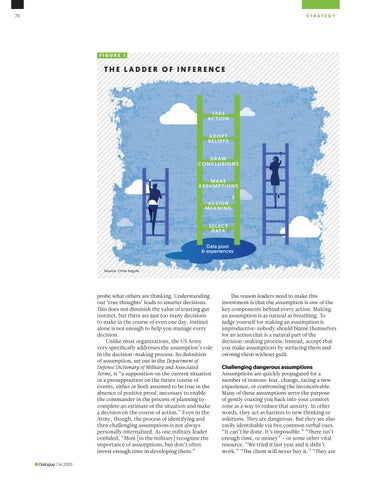 THE LADDER OF INFERENCE

probe what others are thinking. Understanding our ‘true thoughts’ leads to smarter decisions. This does not diminish the value of trusting gut instinct, but there are just too many decisions to make in the course of even one day. Instinct alone is not enough to help you manage every decision. Unlike most organizations, the US Army very specifically addresses the assumption’s role in the decision-making process. Its definition of assumption, set out in the Department of Defense Dictionary of Military and Associated Terms, is “a supposition on the current situation or a presupposition on the future course of events, either or both assumed to be true in the absence of positive proof, necessary to enable the commander in the process of planning to complete an estimate of the situation and make a decision on the course of action.” Even in the Army, though, the process of identifying and then challenging assumptions is not always personally internalized. As one military leader confided, “Most [in the military] recognize the importance of assumptions, but don’t often invest enough time in developing them.” Dialogue Q4 2019

The reason leaders need to make this investment is that the assumption is one of the key components behind every action. Making an assumption is as natural as breathing. To judge yourself for making an assumption is unproductive: nobody should blame themselves for an action that is a natural part of the decision-making process. Instead, accept that you make assumptions by surfacing them and owning them without guilt.

Assumptions are quickly propagated for a number of reasons: fear, change, facing a new experience, or confronting the inconceivable. Many of these assumptions serve the purpose of gently coaxing you back into your comfort zone as a way to reduce that anxiety. In other words, they act as barriers to new thinking or solutions. They are dangerous. But they are also easily identifiable via five common verbal cues. “It can’t be done. It’s impossible.” “There isn’t enough time, or money” – or some other vital resource. “We tried it last year and it didn’t work.” “The client will never buy it.” “They are