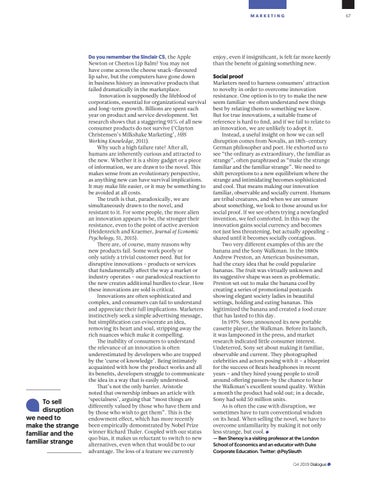 Do you remember the Sinclair C5, the Apple Newton or Cheetos Lip Balm? You may not have come across the cheese snack-flavoured lip salve, but the computers have gone down in business history as innovative products that failed dramatically in the marketplace. Innovation is supposedly the lifeblood of corporations, essential for organizational survival and long-term growth. Billions are spent each year on product and service development. Yet research shows that a staggering 95% of all new consumer products do not survive (‘Clayton Christensen’s Milkshake Marketing’, HBS Working Knowledge, 2011). Why such a high failure rate? After all, humans are inherently curious and attracted to the new. Whether it is a shiny gadget or a piece of information, we are drawn to the novel. This makes sense from an evolutionary perspective, as anything new can have survival implications. It may make life easier, or it may be something to be avoided at all costs. The truth is that, paradoxically, we are simultaneously drawn to the novel, and resistant to it. For some people, the more alien an innovation appears to be, the stronger their resistance, even to the point of active aversion (Heidenreich and Kraemer, Journal of Economic Psychology, 51, 2015). There are, of course, many reasons why new products fail. Some work poorly or only satisfy a trivial customer need. But for disruptive innovations – products or services that fundamentally aﬀect the way a market or industry operates – our paradoxical reaction to the new creates additional hurdles to clear. How these innovations are sold is critical. Innovations are often sophisticated and complex, and consumers can fail to understand and appreciate their full implications. Marketers instinctively seek a simple advertising message, but simplification can eviscerate an idea, removing its heart and soul, stripping away the rich nuances which make it compelling. The inability of consumers to understand the relevance of an innovation is often underestimated by developers who are trapped by the ‘curse of knowledge’. Being intimately acquainted with how the product works and all its benefits, developers struggle to communicate the idea in a way that is easily understood. That’s not the only barrier. Aristotle noted that ownership imbues an article with ‘specialness’, arguing that “most things are diﬀerently valued by those who have them and by those who wish to get them”. This is the endowment eﬀect, which has more recently been empirically demonstrated by Nobel Prize winner Richard Thaler. Coupled with our status quo bias, it makes us reluctant to switch to new alternatives, even when that would be to our advantage. The loss of a feature we currently

enjoy, even if insignificant, is felt far more keenly than the benefit of gaining something new.

Marketers need to harness consumers’ attraction to novelty in order to overcome innovation resistance. One option is to try to make the new seem familiar: we often understand new things best by relating them to something we know. But for true innovations, a suitable frame of reference is hard to find, and if we fail to relate to an innovation, we are unlikely to adopt it. Instead, a useful insight on how we can sell disruption comes from Novalis, an 18th-century German philosopher and poet. He exhorted us to see “the ordinary as extraordinary, the familiar as strange”, often paraphrased as “make the strange familiar and the familiar strange”. We need to shift perceptions to a new equilibrium where the strange and intimidating becomes sophisticated and cool. That means making our innovation familiar, observable and socially current. Humans are tribal creatures, and when we are unsure about something, we look to those around us for social proof. If we see others trying a newfangled invention, we feel comforted. In this way the innovation gains social currency and becomes not just less threatening, but actually appealing – shared until it becomes socially contagious. Two very diﬀerent examples of this are the banana and the Sony Walkman. In the 1880s Andrew Preston, an American businessman, had the crazy idea that he could popularize bananas. The fruit was virtually unknown and its suggestive shape was seen as problematic. Preston set out to make the banana cool by creating a series of promotional postcards showing elegant society ladies in beautiful settings, holding and eating bananas. This legitimized the banana and created a food craze that has lasted to this day. In 1979, Sony announced its new portable cassette player, the Walkman. Before its launch, it was lampooned in the press, and market research indicated little consumer interest. Undeterred, Sony set about making it familiar, observable and current. They photographed celebrities and actors posing with it – a blueprint for the success of Beats headphones in recent years – and they hired young people to stroll around oﬀering passers-by the chance to hear the Walkman’s excellent sound quality. Within a month the product had sold out; in a decade, Sony had sold 50 million units. As is often the case with disruption, we sometimes have to turn conventional wisdom on its head. When selling the novel, we have to overcome unfamiliarity by making it not only less strange, but cool. — Ben Shenoy is a visiting professor at the London School of Economics and an educator with Duke Corporate Education. Twitter: @PsySleuth Q4 2019 Dialogue