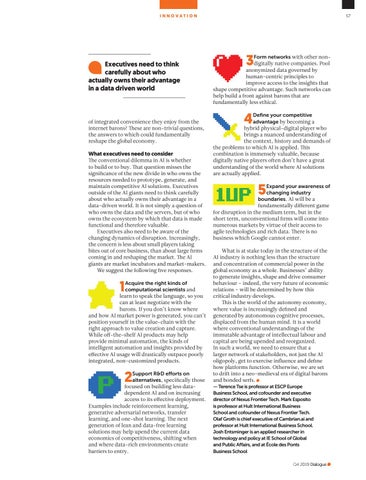 of integrated convenience they enjoy from the internet barons? These are non-trivial questions, the answers to which could fundamentally reshape the global economy.

What executives need to consider

The conventional dilemma in AI is whether to build or to buy. That question misses the significance of the new divide in who owns the resources needed to prototype, generate, and maintain competitive AI solutions. Executives outside of the AI giants need to think carefully about who actually owns their advantage in a data-driven world. It is not simply a question of who owns the data and the servers, but of who owns the ecosystem by which that data is made functional and therefore valuable. Executives also need to be aware of the changing dynamics of disruption. Increasingly, the concern is less about small players taking bites out of core business, than about large firms coming in and reshaping the market. The AI giants are market incubators and market-makers. We suggest the following five responses.

Acquire the right kinds of computational scientists and learn to speak the language, so you can at least negotiate with the barons. If you don’t know where and how AI market power is generated, you can’t position yourself in the value-chain with the right approach to value creation and capture. While oﬀ-the-shelf AI products may help provide minimal automation, the kinds of intelligent automation and insights provided by eﬀective AI usage will drastically outpace poorly integrated, non-customized products.

Support R&D efforts on alternatives, specifically those focused on building less datadependent AI and on increasing access to its eﬀective deployment. Examples include reinforcement learning, generative adversarial networks, transfer learning, and one-shot learning. The next generation of lean and data-free learning solutions may help upend the current data economics of competitiveness, shifting when and where data-rich environments create barriers to entry.

Form networks with other nondigitally native companies. Pool anonymized data governed by human-centric principles to improve access to the insights that shape competitive advantage. Such networks can help build a front against barons that are fundamentally less ethical.

Define your competitive advantage by becoming a hybrid physical-digital player who brings a nuanced understanding of the context, history and demands of the problems to which AI is applied. This combination is immensely valuable, because digitally native players often don’t have a great understanding of the world where AI solutions are actually applied.

Expand your awareness of changing industry boundaries. AI will be a fundamentally diﬀerent game for disruption in the medium term, but in the short term, unconventional firms will come into numerous markets by virtue of their access to agile technologies and rich data. There is no business which Google cannot enter. What is at stake today in the structure of the AI industry is nothing less than the structure and concentration of commercial power in the global economy as a whole. Businesses’ ability to generate insights, shape and drive consumer behaviour – indeed, the very future of economic relations – will be determined by how this critical industry develops. This is the world of the autonomy economy, where value is increasingly defined and generated by autonomous cognitive processes, displaced from the human mind. It is a world where conventional understandings of the immutable advantage of intellectual labour and capital are being upended and reorganized. In such a world, we need to ensure that a larger network of stakeholders, not just the AI oligopoly, get to exercise influence and define how platforms function. Otherwise, we are set to drift into a neo-medieval era of digital barons and bonded serfs. — Terence Tse is professor at ESCP Europe Business School, and cofounder and executive director of Nexus Frontier Tech. Mark Esposito is professor at Hult International Business School and cofounder of Nexus Frontier Tech. Olaf Groth is chief executive of Cambrian.ai and professor at Hult International Business School. Josh Entsminger is an applied researcher in technology and policy at IE School of Global and Public Affairs, and at École des Ponts Business School Q4 2019 Dialogue