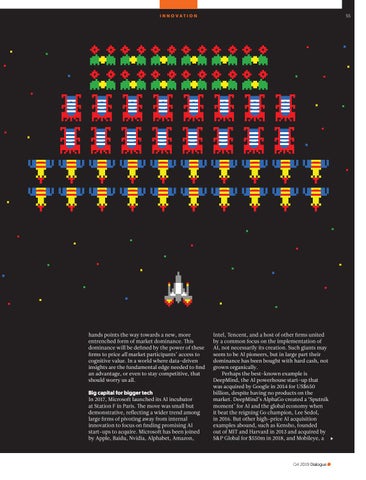 hands points the way towards a new, more entrenched form of market dominance. This dominance will be defined by the power of these firms to price all market participants’ access to cognitive value. In a world where data-driven insights are the fundamental edge needed to find an advantage, or even to stay competitive, that should worry us all.

In 2017, Microsoft launched its AI incubator at Station F in Paris. The move was small but demonstrative, reflecting a wider trend among large firms of pivoting away from internal innovation to focus on finding promising AI start-ups to acquire. Microsoft has been joined by Apple, Baidu, Nvidia, Alphabet, Amazon,

Intel, Tencent, and a host of other firms united by a common focus on the implementation of AI, not necessarily its creation. Such giants may seem to be AI pioneers, but in large part their dominance has been bought with hard cash, not grown organically. Perhaps the best-known example is DeepMind, the AI powerhouse start-up that was acquired by Google in 2014 for US$650 billion, despite having no products on the market. DeepMind’s AlphaGo created a ‘Sputnik moment’ for AI and the global economy when it beat the reigning Go champion, Lee Sedol, in 2016. But other high-price AI acquisition examples abound, such as Kensho, founded out of MIT and Harvard in 2013 and acquired by S&P Global for $550m in 2018, and Mobileye, aa