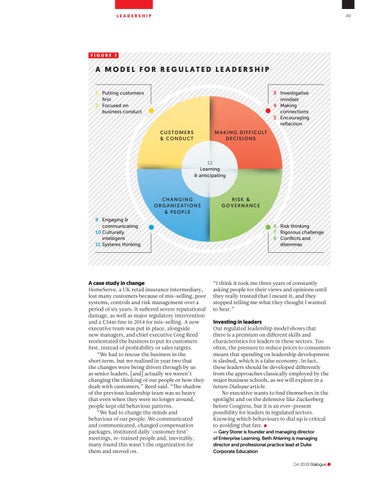 A case study in change

HomeServe, a UK retail insurance intermediary, lost many customers because of mis-selling, poor systems, controls and risk management over a period of six years. It suﬀered severe reputational damage, as well as major regulatory intervention and a £34m fine in 2014 for mis-selling. A new executive team was put in place, alongside new managers, and chief executive Greg Reed reorientated the business to put its customers first, instead of profitability or sales targets. “We had to rescue the business in the short term, but we realized in year two that the changes were being driven through by us as senior leaders, [and] actually we weren’t changing the thinking of our people or how they dealt with customers,” Reed said. “The shadow of the previous leadership team was so heavy that even when they were no longer around, people kept old behaviour patterns. “We had to change the minds and behaviour of our people. We communicated and communicated, changed compensation packages, instituted daily ‘customer first’ meetings, re-trained people and, inevitably, many found this wasn’t the organization for them and moved on.

“I think it took me three years of constantly asking people for their views and opinions until they really trusted that I meant it, and they stopped telling me what they thought I wanted to hear.”

Our regulated leadership model shows that there is a premium on diﬀerent skills and characteristics for leaders in these sectors. Too often, the pressure to reduce prices to consumers means that spending on leadership development is slashed, which is a false economy. In fact, these leaders should be developed diﬀerently from the approaches classically employed by the major business schools, as we will explore in a future Dialogue article. No executive wants to find themselves in the spotlight and on the defensive like Zuckerberg before Congress, but it is an ever-present possibility for leaders in regulated sectors. Knowing which behaviours to dial up is critical to avoiding that fate. — Gary Storer is founder and managing director of Enterprise Learning. Beth Ahlering is managing director and professional practice lead at Duke Corporate Education Q4 2019 Dialogue