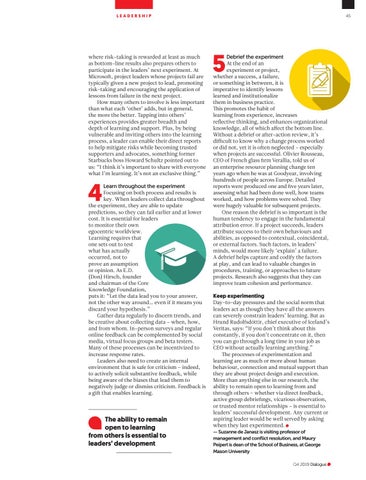 where risk-taking is rewarded at least as much as bottom-line results also prepares others to participate in the leaders’ next experiment. At Microsoft, project leaders whose projects fail are typically given a new project to lead, promoting risk-taking and encouraging the application of lessons from failure in the next project. How many others to involve is less important than what each ‘other’ adds, but in general, the more the better. Tapping into others’ experiences provides greater breadth and depth of learning and support. Plus, by being vulnerable and inviting others into the learning process, a leader can enable their direct reports to help mitigate risks while becoming trusted supporters and advocates, something former Starbucks boss Howard Schultz pointed out to us: “I think it’s important to share with everyone what I’m learning. It’s not an exclusive thing.”

Learn throughout the experiment

Focusing on both process and results is key. When leaders collect data throughout the experiment, they are able to update predictions, so they can fail earlier and at lower cost. It is essential for leaders to monitor their own egocentric worldview. Learning requires that one sets out to test what has actually occurred, not to prove an assumption or opinion. As E.D. (Don) Hirsch, founder and chairman of the Core Knowledge Foundation, puts it: “Let the data lead you to your answer, not the other way around… even if it means you discard your hypothesis.” Gather data regularly to discern trends, and be creative about collecting data – when, how, and from whom. In-person surveys and regular online feedback can be complemented by social media, virtual focus groups and beta testers. Many of these processes can be incentivized to increase response rates. Leaders also need to create an internal environment that is safe for criticism – indeed, to actively solicit substantive feedback, while being aware of the biases that lead them to negatively judge or dismiss criticism. Feedback is a gift that enables learning.

At the end of an experiment or project, whether a success, a failure, or something in between, it is imperative to identify lessons learned and institutionalize them in business practice. This promotes the habit of learning from experience, increases reflective thinking, and enhances organizational knowledge, all of which aﬀect the bottom line. Without a debrief or after-action review, it’s diﬃcult to know why a change process worked or did not, yet it is often neglected – especially when projects are successful. Olivier Rousseau, CEO of French glass firm Verallia, told us of an enterprise resource planning change ten years ago when he was at Goodyear, involving hundreds of people across Europe. Detailed reports were produced one and five years later, assessing what had been done well, how teams worked, and how problems were solved. They were hugely valuable for subsequent projects. One reason the debrief is so important is the human tendency to engage in the fundamental attribution error. If a project succeeds, leaders attribute success to their own behaviours and abilities, as opposed to contextual, coincidental, or external factors. Such factors, in leaders’ minds, would more likely ‘explain’ a failure. A debrief helps capture and codify the factors at play, and can lead to valuable changes in procedures, training, or approaches to future projects. Research also suggests that they can improve team cohesion and performance.

Day-to-day pressures and the social norm that leaders act as though they have all the answers can severely constrain leaders’ learning. But as Hrund Rudolfsdóttir, chief executive of Iceland’s Veritas, says: “If you don’t think about this constantly, if you don’t concentrate on it, then you can go through a long time in your job as CEO without actually learning anything.” The processes of experimentation and learning are as much or more about human behaviour, connection and mutual support than they are about project design and execution. More than anything else in our research, the ability to remain open to learning from and through others – whether via direct feedback, active group debriefings, vicarious observation, or trusted mentor relationships – is essential to leaders’ successful development. Any current or aspiring leader would be well served by asking when they last experimented. — Suzanne de Janasz is visiting professor of management and conflict resolution, and Maury Peiperl is dean of the School of Business, at George Mason University Q4 2019 Dialogue