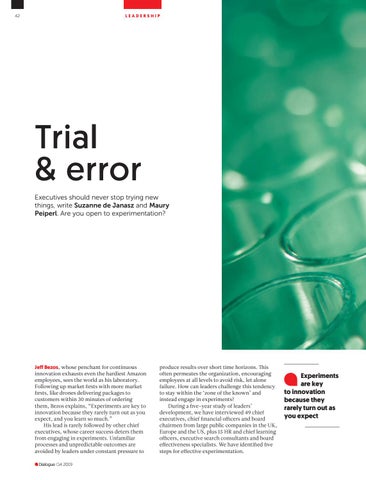 Jeff Bezos, whose penchant for continuous innovation exhausts even the hardiest Amazon employees, sees the world as his laboratory. Following up market firsts with more market firsts, like drones delivering packages to customers within 30 minutes of ordering them, Bezos explains, “Experiments are key to innovation because they rarely turn out as you expect, and you learn so much.” His lead is rarely followed by other chief executives, whose career success deters them from engaging in experiments. Unfamiliar processes and unpredictable outcomes are avoided by leaders under constant pressure to Dialogue Q4 2019

produce results over short time horizons. This often permeates the organization, encouraging employees at all levels to avoid risk, let alone failure. How can leaders challenge this tendency to stay within the ‘zone of the known’ and instead engage in experiments? During a five-year study of leaders’ development, we have interviewed 49 chief executives, chief financial oﬃcers and board chairmen from large public companies in the UK, Europe and the US, plus 15 HR and chief learning oﬃcers, executive search consultants and board eﬀectiveness specialists. We have identified five steps for eﬀective experimentation.