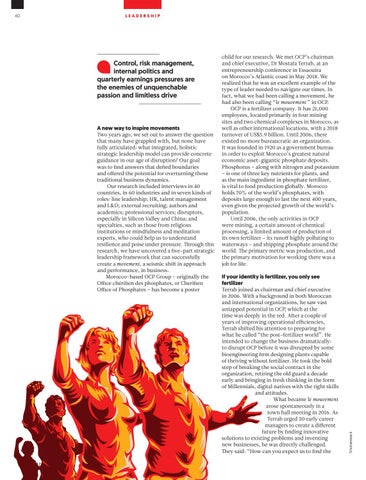 A new way to inspire movements

Two years ago, we set out to answer the question that many have grappled with, but none have fully articulated: what integrated, holistic strategic leadership model can provide concrete guidance in our age of disruption? Our goal was to find answers that defied boundaries and oﬀered the potential for overturning those traditional business dynamics. Our research included interviews in 40 countries, in 60 industries and in seven kinds of roles: line leadership; HR, talent management and L&D; external recruiting; authors and academics; professional services; disruptors, especially in Silicon Valley and China; and specialties, such as those from religious institutions or mindfulness and meditation experts, who could help us to understand resilience and poise under pressure. Through this research, we have uncovered a five-part strategic leadership framework that can successfully create a movement, a seismic shift in approach and performance, in business. Morocco-based OCP Group – originally the Oﬃce chérifien des phosphates, or Cherifien Oﬃce of Phosphates – has become a poster

child for our research. We met OCP’s chairman and chief executive, Dr Mostafa Terrab, at an entrepreneurship conference in Essaouira on Morocco’s Atlantic coast in May 2018. We realized that he was an excellent example of the type of leader needed to navigate our times. In fact, what we had been calling a movement, he had also been calling “le mouvement ” in OCP. OCP is a fertilizer company. It has 21,000 employees, located primarily in four mining sites and two chemical complexes in Morocco, as well as other international locations, with a 2018 turnover of US$5.9 billion. Until 2006, there existed no more bureaucratic an organization. It was founded in 1920 as a government bureau in order to exploit Morocco’s greatest natural economic asset: gigantic phosphate deposits. Phosphorus – along with nitrogen and potassium – is one of three key nutrients for plants, and as the main ingredient in phosphate fertilizer, is vital to food production globally. Morocco holds 70% of the world’s phosphates, with deposits large enough to last the next 400 years, even given the projected growth of the world’s population. Until 2006, the only activities in OCP were mining, a certain amount of chemical processing, a limited amount of production of its own fertilizer – its runoﬀ highly polluting to waterways – and shipping phosphate around the world. The primary metric was production, and the primary motivation for working there was a job for life.

If your identity is fertilizer, you only see fertilizer

Terrab joined as chairman and chief executive in 2006. With a background in both Moroccan and international organizations, he saw vast untapped potential in OCP, which at the time was deeply in the red. After a couple of years of improving operational eﬃciencies, Terrab shifted his attention to preparing for what he called “the post-fertilizer world”. He intended to change the business dramatically: to disrupt OCP before it was disrupted by some bioengineering firm designing plants capable of thriving without fertilizer. He took the bold step of breaking the social contract in the organization, retiring the old guard a decade early and bringing in fresh thinking in the form of Millennials, digital natives with the right skills and attitudes. What became le mouvement arose spontaneously in a town hall meeting in 2016. As Terrab urged 50 early career managers to create a diﬀerent future by finding innovative solutions to existing problems and inventing new businesses, he was directly challenged. They said: “How can you expect us to find the