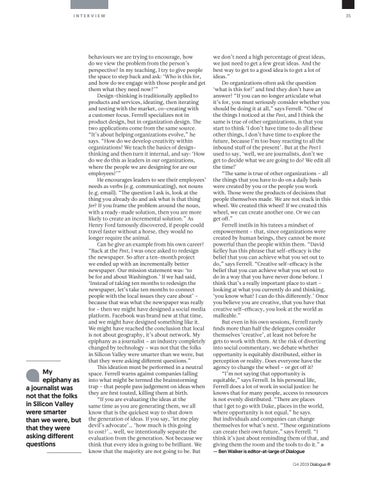 My epiphany as a journalist was not that the folks in Silicon Valley were smarter than we were, but that they were asking different questions

behaviours we are trying to encourage, how do we view the problem from the person’s perspective? In my teaching, I try to give people the space to step back and ask: ‘Who is this for, and how do we engage with those people and get them what they need now?’” Design-thinking is traditionally applied to products and services, ideating, then iterating and testing with the market, co-creating with a customer focus. Ferrell specializes not in product design, but in organization design. The two applications come from the same source. “It’s about helping organizations evolve,” he says. “How do we develop creativity within organizations? We teach the basics of designthinking and then turn it internal, and say: ‘How do we do this as leaders in our organizations, where the people we are designing for are our employees?’” He encourages leaders to see their employees’ needs as verbs (e.g. communicating), not nouns (e.g. email). “The question I ask is, look at the thing you already do and ask what is that thing for? If you frame the problem around the noun, with a ready-made solution, then you are more likely to create an incremental solution.” As Henry Ford famously discovered, if people could travel faster without a horse, they would no longer require the animal. Can he give an example from his own career? “Back at the Post, I was once asked to redesign the newspaper. So after a ten-month project we ended up with an incrementally better newspaper. Our mission statement was: ‘to be for and about Washington.’ If we had said, ‘Instead of taking ten months to redesign the newspaper, let’s take ten months to connect people with the local issues they care about’ – because that was what the newspaper was really for – then we might have designed a social media platform. Facebook was brand new at that time, and we might have designed something like it. We might have reached the conclusion that local is not about geography, it’s about network. My epiphany as a journalist – an industry completely changed by technology – was not that the folks in Silicon Valley were smarter than we were, but that they were asking diﬀerent questions.” This ideation must be performed in a neutral space. Ferrell warns against companies falling into what might be termed the brainstorming trap – that people pass judgement on ideas when they are first touted, killing them at birth. “If you are evaluating the ideas at the same time as you are generating them, we all know that is the quickest way to shut down the generation of ideas. If you say, ‘let me play devil’s advocate’… ‘how much is this going to cost?’… well, we intentionally separate the evaluation from the generation. Not because we think that every idea is going to be brilliant. We know that the majority are not going to be. But

we don’t need a high percentage of great ideas, we just need to get a few great ideas. And the best way to get to a good idea is to get a lot of ideas.” Do organizations often ask the question ‘what is this for?’ and find they don’t have an answer? “If you can no longer articulate what it’s for, you must seriously consider whether you should be doing it at all,” says Ferrell. “One of the things I noticed at the Post, and I think the same is true of other organizations, is that you start to think ‘I don’t have time to do all these other things, I don’t have time to explore the future, because I’m too busy reacting to all the inbound stuﬀ of the present’. But at the Post I used to say, ‘well, we are journalists, don’t we get to decide what we are going to do? We edit all the time!’ “The same is true of other organizations – all the things that you have to do on a daily basis were created by you or the people you work with. Those were the products of decisions that people themselves made. We are not stuck in this wheel. We created this wheel! If we created this wheel, we can create another one. Or we can get oﬀ.” Ferrell instils in his tutees a mindset of empowerment – that, since organizations were created by human beings, they cannot be more powerful than the people within them. “David Kelley has this phrase that self-eﬃcacy is the belief that you can achieve what you set out to do,” says Ferrell. “Creative self-eﬃcacy is the belief that you can achieve what you set out to do in a way that you have never done before. I think that’s a really important place to start – looking at what you currently do and thinking, ‘you know what? I can do this diﬀerently.’ Once you believe you are creative, that you have that creative self-eﬃcacy, you look at the world as malleable.” But even in his own sessions, Ferrell rarely finds more than half the delegates consider themselves ‘creative’, at least not before he gets to work with them. At the risk of diverting into social commentary, we debate whether opportunity is equitably distributed, either in perception or reality. Does everyone have the agency to change the wheel – or get oﬀ it? “I’m not saying that opportunity is equitable,” says Ferrell. In his personal life, Ferrell does a lot of work in social justice: he knows that for many people, access to resources is not evenly distributed. “There are places that I get to go with Duke, places in the world, where opportunity is not equal,” he says. But individuals and companies can change themselves for what’s next. “These organizations can create their own future,” says Ferrell. “I think it’s just about reminding them of that, and giving them the room and the tools to do it.” — Ben Walker is editor-at-large of Dialogue Q4 2019 Dialogue