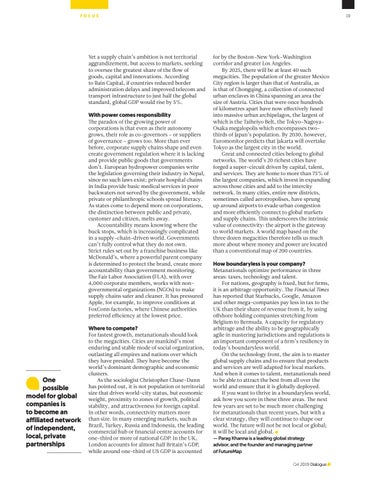 Yet a supply chain’s ambition is not territorial aggrandizement, but access to markets, seeking to oversee the greatest share of the flow of goods, capital and innovations. According to Bain Capital, if countries reduced border administration delays and improved telecom and transport infrastructure to just half the global standard, global GDP would rise by 5%.

The paradox of the growing power of corporations is that even as their autonomy grows, their role as co-governors – or suppliers of governance – grows too. More than ever before, corporate supply chains shape and even create government regulation where it is lacking and provide public goods that governments don’t. European hydropower companies write the legislation governing their industry in Nepal, since no such laws exist; private hospital chains in India provide basic medical services in poor backwaters not served by the government, while private or philanthropic schools spread literacy. As states come to depend more on corporations, the distinction between public and private, customer and citizen, melts away. Accountability means knowing where the buck stops, which is increasingly complicated in a supply-chain-driven world. Governments can’t fully control what they do not own. Strict rules set out by a franchise business like McDonald’s, where a powerful parent company is determined to protect the brand, create more accountability than government monitoring. The Fair Labor Association (FLA), with over 4,000 corporate members, works with nongovernmental organizations (NGOs) to make supply chains safer and cleaner. It has pressured Apple, for example, to improve conditions at FoxConn factories, where Chinese authorities preferred eﬃciency at the lowest price.

One possible model for global companies is to become an affiliated network of independent, local, private partnerships

For fastest growth, metanationals should look to the megacities. Cities are mankind’s most enduring and stable mode of social organization, outlasting all empires and nations over which they have presided. They have become the world’s dominant demographic and economic clusters. As the sociologist Christopher Chase-Dunn has pointed out, it is not population or territorial size that drives world-city status, but economic weight, proximity to zones of growth, political stability, and attractiveness for foreign capital. In other words, connectivity matters more than size. In many emerging markets, such as Brazil, Turkey, Russia and Indonesia, the leading commercial hub or financial centre accounts for one-third or more of national GDP. In the UK, London accounts for almost half Britain’s GDP, while around one-third of US GDP is accounted

for by the Boston-New York-Washington corridor and greater Los Angeles. By 2025, there will be at least 40 such megacities. The population of the greater Mexico City region is larger than that of Australia, as is that of Chongqing, a collection of connected urban enclaves in China spanning an area the size of Austria. Cities that were once hundreds of kilometres apart have now eﬀectively fused into massive urban archipelagos, the largest of which is the Taiheiyo Belt, the Tokyo-NagoyaOsaka megalopolis which encompasses twothirds of Japan’s population. By 2030, however, Euromonitor predicts that Jakarta will overtake Tokyo as the largest city in the world. Great and connected cities belong to global networks. The world’s 20 richest cities have forged a super-circuit driven by capital, talent, and services. They are home to more than 75% of the largest companies, which invest in expanding across those cities and add to the intercity network. In many cities, entire new districts, sometimes called aerotropolises, have sprung up around airports to evade urban congestion and more eﬃciently connect to global markets and supply chains. This underscores the intrinsic value of connectivity: the airport is the gateway to world markets. A world map based on the three dozen megacities therefore tells us much more about where money and power are located than a conventional map of 200 countries.

How boundaryless is your company?

Metanationals optimize performance in three areas: taxes, technology and talent. For nations, geography is fixed, but for firms, it is an arbitrage opportunity. The Financial Times has reported that Starbucks, Google, Amazon and other mega-companies pay less in tax to the UK than their share of revenue from it, by using oﬀshore holding companies stretching from Belgium to Bermuda. A capacity for regulatory arbitrage and the ability to be geographically agile in mastering jurisdictions and regulations is an important component of a firm’s resiliency in today’s boundaryless world. On the technology front, the aim is to master global supply chains and to ensure that products and services are well adapted for local markets. And when it comes to talent, metanationals need to be able to attract the best from all over the world and ensure that it is globally deployed. If you want to thrive in a boundaryless world, ask how you score in these three areas. The next few years are set to be much more challenging for metanationals than recent years, but with a clear strategy, they will continue to shape our world. The future will not be not local or global; it will be local and global. — Parag Khanna is a leading global strategy advisor, and the founder and managing partner of FutureMap Q4 2019 Dialogue