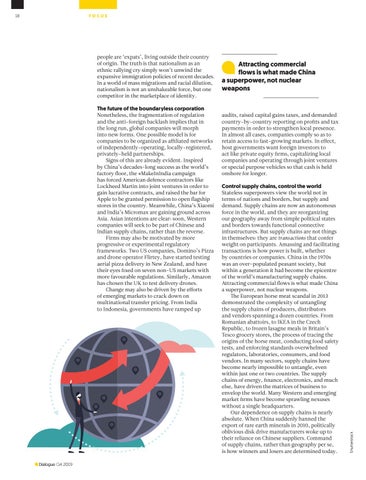 people are ‘expats’, living outside their country of origin. The truth is that nationalism as an ethnic rallying cry simply won’t unwind the expansive immigration policies of recent decades. In a world of mass migrations and racial dilution, nationalism is not an unshakeable force, but one competitor in the marketplace of identity.

The future of the boundaryless corporation

Nonetheless, the fragmentation of regulation and the anti-foreign backlash implies that in the long run, global companies will morph into new forms. One possible model is for companies to be organized as aﬃliated networks of independently-operating, locally-registered, privately-held partnerships. Signs of this are already evident. Inspired by China’s decades-long success as the world’s factory floor, the #MakeInIndia campaign has forced American defence contractors like Lockheed Martin into joint ventures in order to gain lucrative contracts, and raised the bar for Apple to be granted permission to open flagship stores in the country. Meanwhile, China’s Xiaomi and India’s Micromax are gaining ground across Asia. Asian intentions are clear: soon, Western companies will seek to be part of Chinese and Indian supply chains, rather than the reverse. Firms may also be motivated by more progressive or experimental regulatory frameworks. Two US companies, Domino’s Pizza and drone operator Flirtey, have started testing aerial pizza delivery in New Zealand, and have their eyes fixed on seven non-US markets with more favourable regulations. Similarly, Amazon has chosen the UK to test delivery drones. Change may also be driven by the eﬀorts of emerging markets to crack down on multinational transfer pricing. From India to Indonesia, governments have ramped up

Attracting commercial flows is what made China a superpower, not nuclear weapons

audits, raised capital gains taxes, and demanded country-by-country reporting on profits and tax payments in order to strengthen local presence. In almost all cases, companies comply so as to retain access to fast-growing markets. In eﬀect, host governments want foreign investors to act like private equity firms, capitalizing local companies and operating through joint ventures or special purpose vehicles so that cash is held onshore for longer.

Stateless superpowers view the world not in terms of nations and borders, but supply and demand. Supply chains are now an autonomous force in the world, and they are reorganizing our geography away from simple political states and borders towards functional connective infrastructures. But supply chains are not things in themselves: they are transactions that confer weight on participants. Amassing and facilitating transactions is how power is built, whether by countries or companies. China in the 1970s was an over-populated peasant society, but within a generation it had become the epicentre of the world’s manufacturing supply chains. Attracting commercial flows is what made China a superpower, not nuclear weapons. The European horse meat scandal in 2013 demonstrated the complexity of untangling the supply chains of producers, distributors and vendors spanning a dozen countries. From Romanian abattoirs, to IKEA in the Czech Republic, to frozen lasagne meals in Britain’s Tesco grocery stores, the process of tracing the origins of the horse meat, conducting food safety tests, and enforcing standards overwhelmed regulators, laboratories, consumers, and food vendors. In many sectors, supply chains have become nearly impossible to untangle, even within just one or two countries. The supply chains of energy, finance, electronics, and much else, have driven the matrices of business to envelop the world. Many Western and emerging market firms have become sprawling nexuses without a single headquarters. Our dependence on supply chains is nearly absolute. When China suddenly banned the export of rare earth minerals in 2010, politically oblivious disk drive manufacturers woke up to their reliance on Chinese suppliers. Command of supply chains, rather than geography per se, is how winners and losers are determined today.