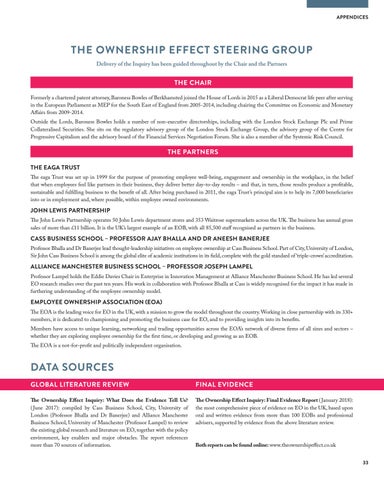 THE CHAIR Formerly a chartered patent attorney, Baroness Bowles of Berkhamsted joined the House of Lords in 2015 as a Liberal Democrat life peer after serving in the European Parliament as MEP for the South East of England from 2005-2014, including chairing the Committee on Economic and Monetary Affairs from 2009-2014. Outside the Lords, Baroness Bowles holds a number of non-executive directorships, including with the London Stock Exchange Plc and Prime Collateralised Securities. She sits on the regulatory advisory group of the London Stock Exchange Group, the advisory group of the Centre for Progressive Capitalism and the advisory board of the Financial Services Negotiation Forum. She is also a member of the Systemic Risk Council.

THE PARTNERS THE EAGA TRUST The eaga Trust was set up in 1999 for the purpose of promoting employee well-being, engagement and ownership in the workplace, in the belief that when employees feel like partners in their business, they deliver better day-to-day results – and that, in turn, those results produce a profitable, sustainable and fulfilling business to the benefit of all. After being purchased in 2011, the eaga Trust’s principal aim is to help its 7,000 beneficiaries into or in employment and, where possible, within employee owned environments.

JOHN LEWIS PARTNERSHIP The John Lewis Partnership operates 50 John Lewis department stores and 353 Waitrose supermarkets across the UK. The business has annual gross sales of more than £11 billion. It is the UK’s largest example of an EOB, with all 85,500 staff recognised as partners in the business.

ALLIANCE MANCHESTER BUSINESS SCHOOL – PROFESSOR JOSEPH LAMPEL Professor Lampel holds the Eddie Davies Chair in Enterprise in Innovation Management at Alliance Manchester Business School. He has led several EO research studies over the past ten years. His work in collaboration with Professor Bhalla at Cass is widely recognised for the impact it has made in furthering understanding of the employee ownership model.

EMPLOYEE OWNERSHIP ASSOCIATION (EOA) The EOA is the leading voice for EO in the UK, with a mission to grow the model throughout the country. Working in close partnership with its 330+ members, it is dedicated to championing and promoting the business case for EO, and to providing insights into its benefits. Members have access to unique learning, networking and trading opportunities across the EOA’s network of diverse firms of all sizes and sectors – whether they are exploring employee ownership for the first time, or developing and growing as an EOB. The EOA is a not-for-profit and politically independent organisation.

The Ownership Effect Inquiry: What Does the Evidence Tell Us? ( June 2017): compiled by Cass Business School, City, University of London (Professor Bhalla and Dr Banerjee) and Alliance Manchester Business School, University of Manchester (Professor Lampel) to review the existing global research and literature on EO, together with the policy environment, key enablers and major obstacles. The report references more than 70 sources of information.

The Ownership Effect Inquiry: Final Evidence Report ( January 2018): the most comprehensive piece of evidence on EO in the UK, based upon oral and written evidence from more than 100 EOBs and professional advisers, supported by evidence from the above literature review. Both reports can be found online: www.theownershipeffect.co.uk 33