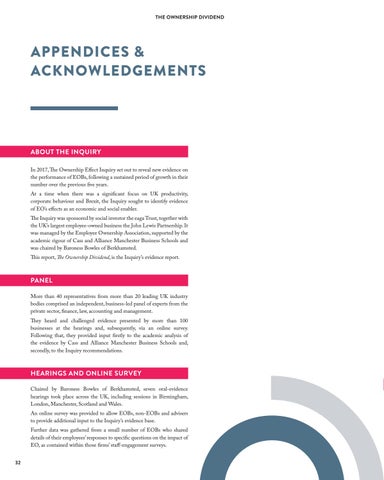 ABOUT THE INQUIRY In 2017, The Ownership Effect Inquiry set out to reveal new evidence on the performance of EOBs, following a sustained period of growth in their number over the previous five years. At a time when there was a significant focus on UK productivity, corporate behaviour and Brexit, the Inquiry sought to identify evidence of EO’s effects as an economic and social enabler. The Inquiry was sponsored by social investor the eaga Trust, together with the UK’s largest employee-owned business the John Lewis Partnership. It was managed by the Employee Ownership Association, supported by the academic rigour of Cass and Alliance Manchester Business Schools and was chaired by Baroness Bowles of Berkhamsted. This report, The Ownership Dividend, is the Inquiry’s evidence report.

PANEL More than 40 representatives from more than 20 leading UK industry bodies comprised an independent, business-led panel of experts from the private sector, finance, law, accounting and management. They heard and challenged evidence presented by more than 100 businesses at the hearings and, subsequently, via an online survey. Following that, they provided input firstly to the academic analysis of the evidence by Cass and Alliance Manchester Business Schools and, secondly, to the Inquiry recommendations.

HEARINGS AND ONLINE SURVEY Chaired by Baroness Bowles of Berkhamsted, seven oral-evidence hearings took place across the UK, including sessions in Birmingham, London, Manchester, Scotland and Wales. An online survey was provided to allow EOBs, non-EOBs and advisers to provide additional input to the Inquiry’s evidence base. Further data was gathered from a small number of EOBs who shared details of their employees’ responses to specific questions on the impact of EO, as contained within those firms’ staff-engagement surveys. 32