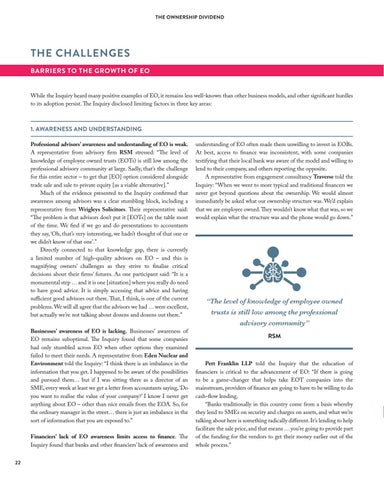 THE CHALLENGES BARRIERS TO THE GROWTH OF EO While the Inquiry heard many positive examples of EO, it remains less well-known than other business models, and other significant hurdles to its adoption persist. The Inquiry disclosed limiting factors in three key areas:

1. AWARENESS AND UNDERSTANDING Professional advisors’ awareness and understanding of EO is weak. A representative from advisory firm RSM stressed: “The level of knowledge of employee owned trusts (EOTs) is still low among the professional advisory community at large. Sadly, that’s the challenge for this entire sector – to get that [EO] option considered alongside trade sale and sale to private equity [as a viable alternative].” Much of the evidence presented to the Inquiry confirmed that awareness among advisors was a clear stumbling block, including a representative from Wrigleys Solicitors. Their representative said: “The problem is that advisors don’t put it [EOTs] on the table most of the time. We find if we go and do presentations to accountants they say, ‘Oh, that’s very interesting, we hadn’t thought of that one or we didn’t know of that one’.” Directly connected to that knowledge gap, there is currently a limited number of high-quality advisors on EO – and this is magnifying owners’ challenges as they strive to finalise critical decisions about their firms’ futures. As one participant said: “It is a monumental step … and it is one [situation] where you really do need to have good advice. It is simply accessing that advice and having sufficient good advisors out there. That, I think, is one of the current problems. We will all agree that the advisors we had … were excellent, but actually we’re not talking about dozens and dozens out there.” Businesses’ awareness of EO is lacking. Businesses’ awareness of EO remains suboptimal. The Inquiry found that some companies had only stumbled across EO when other options they examined failed to meet their needs. A representative from Eden Nuclear and Environment told the Inquiry: “I think there is an imbalance in the information that you get. I happened to be aware of the possibilities and pursued them… but if I was sitting there as a director of an SME, every week at least we get a letter from accountants saying, ‘Do you want to realise the value of your company?’ I know I never get anything about EO – other than nice emails from the EOA. So, for the ordinary manager in the street… there is just an imbalance in the sort of information that you are exposed to.” Financiers’ lack of EO awareness limits access to finance. The Inquiry found that banks and other financiers’ lack of awareness and 22

understanding of EO often made them unwilling to invest in EOBs. At best, access to finance was inconsistent, with some companies testifying that their local bank was aware of the model and willing to lend to their company, and others reporting the opposite. A representative from engagement consultancy Traverse told the Inquiry: “When we went to more typical and traditional financers we never got beyond questions about the ownership. We would almost immediately be asked what our ownership structure was. We’d explain that we are employee owned. They wouldn’t know what that was, so we would explain what the structure was and the phone would go down.”

Pett Franklin LLP told the Inquiry that the education of financiers is critical to the advancement of EO: “If there is going to be a game-changer that helps take EOT companies into the mainstream, providers of finance are going to have to be willing to do cash-flow lending. “Banks traditionally in this country come from a basis whereby they lend to SMEs on security and charges on assets, and what we’re talking about here is something radically different. It’s lending to help facilitate the sale price, and that means … you’re going to provide part of the funding for the vendors to get their money earlier out of the whole process.”