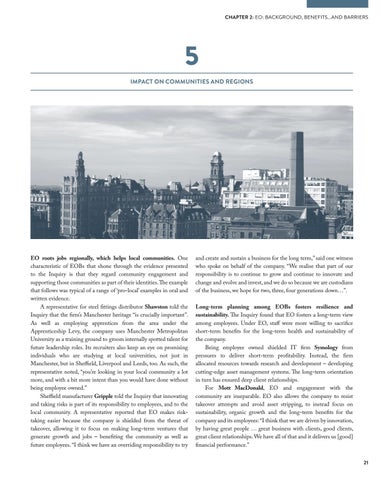 5 IMPACT ON COMMUNITIES AND REGIONS

EO roots jobs regionally, which helps local communities. One characteristic of EOBs that shone through the evidence presented to the Inquiry is that they regard community engagement and supporting those communities as part of their identities. The example that follows was typical of a range of ‘pro-local’ examples in oral and written evidence. A representative for steel fittings distributor Shawston told the Inquiry that the firm’s Manchester heritage “is crucially important”. As well as employing apprentices from the area under the Apprenticeship Levy, the company uses Manchester Metropolitan University as a training ground to groom internally spotted talent for future leadership roles. Its recruiters also keep an eye on promising individuals who are studying at local universities, not just in Manchester, but in Sheffield, Liverpool and Leeds, too. As such, the representative noted, “you’re looking in your local community a lot more, and with a bit more intent than you would have done without being employee owned.” Sheffield manufacturer Gripple told the Inquiry that innovating and taking risks is part of its responsibility to employees, and to the local community. A representative reported that EO makes risktaking easier because the company is shielded from the threat of takeover, allowing it to focus on making long-term ventures that generate growth and jobs – benefiting the community as well as future employees. “I think we have an overriding responsibility to try

and create and sustain a business for the long term,” said one witness who spoke on behalf of the company. “We realise that part of our responsibility is to continue to grow and continue to innovate and change and evolve and invest, and we do so because we are custodians of the business, we hope for two, three, four generations down…”. Long-term planning among EOBs fosters resilience and sustainability. The Inquiry found that EO fosters a long-term view among employees. Under EO, staff were more willing to sacrifice short-term benefits for the long-term health and sustainability of the company. Being employee owned shielded IT firm Symology from pressures to deliver short-term profitability. Instead, the firm allocated resources towards research and development – developing cutting-edge asset management systems. The long-term orientation in turn has ensured deep client relationships. For Mott MacDonald, EO and engagement with the community are inseparable. EO also allows the company to resist takeover attempts and avoid asset stripping, to instead focus on sustainability, organic growth and the long-term benefits for the company and its employees: “I think that we are driven by innovation, by having great people … great business with clients, good clients, great client relationships. We have all of that and it delivers us [good] financial performance.” 21