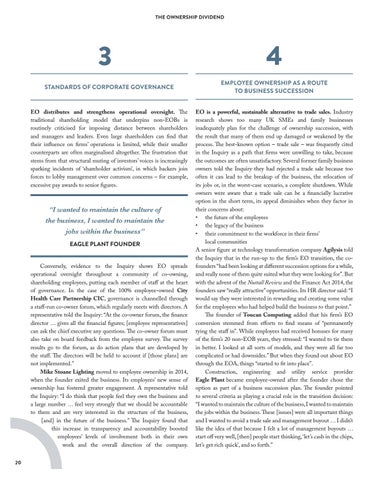 EO distributes and strengthens operational oversight. The traditional shareholding model that underpins non-EOBs is routinely criticised for imposing distance between shareholders and managers and leaders. Even large shareholders can find that their influence on firms’ operations is limited, while their smaller counterparts are often marginalised altogether. The frustration that stems from that structural muting of investors’ voices is increasingly sparking incidents of ‘shareholder activism’, in which backers join forces to lobby management over common concerns – for example, excessive pay awards to senior figures.

“I wanted to maintain the culture of the business, I wanted to maintain the jobs within the business” EAGLE PLANT FOUNDER Conversely, evidence to the Inquiry shows EO spreads operational oversight throughout a community of co-owning, shareholding employees, putting each member of staff at the heart of governance. In the case of the 100% employee-owned City Health Care Partnership CIC, governance is channelled through a staff-run co-owner forum, which regularly meets with directors. A representative told the Inquiry: “At the co-owner forum, the finance director … gives all the financial figures; [employee representatives] can ask the chief executive any questions. The co-owner forum must also take on board feedback from the employee survey. The survey results go to the forum, as do action plans that are developed by the staff. The directors will be held to account if [those plans] are not implemented.” Mike Stoane Lighting moved to employee ownership in 2014, when the founder exited the business. Its employees’ new sense of ownership has fostered greater engagement. A representative told the Inquiry: “I do think that people feel they own the business and a large number … feel very strongly that we should be accountable to them and are very interested in the structure of the business, [and] in the future of the business.” The Inquiry found that this increase in transparency and accountability boosted employees’ levels of involvement both in their own work and the overall direction of the company. 20

4 EMPLOYEE OWNERSHIP AS A ROUTE TO BUSINESS SUCCESSION EO is a powerful, sustainable alternative to trade sales. Industry research shows too many UK SMEs and family businesses inadequately plan for the challenge of ownership succession, with the result that many of them end up damaged or weakened by the process. The best-known option – trade sale – was frequently cited in the Inquiry as a path that firms were unwilling to take, because the outcomes are often unsatisfactory. Several former family business owners told the Inquiry they had rejected a trade sale because too often it can lead to the breakup of the business, the relocation of its jobs or, in the worst-case scenario, a complete shutdown. While owners were aware that a trade sale can be a financially lucrative option in the short term, its appeal diminishes when they factor in their concerns about: • the future of the employees • the legacy of the business • their commitment to the workforce in their firms’ local communities A senior figure at technology transformation company Agilysis told the Inquiry that in the run-up to the firm’s EO transition, the cofounders “had been looking at different succession options for a while, and really none of them quite suited what they were looking for”. But with the advent of the Nuttall Review and the Finance Act 2014, the founders saw “really attractive” opportunities. Its HR director said: “I would say they were interested in rewarding and creating some value for the employees who had helped build the business to that point.” The founder of Toucan Computing added that his firm’s EO conversion stemmed from efforts to find means of “permanently tying the staff in”. While employees had received bonuses for many of the firm’s 20 non-EOB years, they stressed: “I wanted to tie them in better. I looked at all sorts of models, and they were all far too complicated or had downsides.” But when they found out about EO through the EOA, things “started to fit into place”. Construction, engineering and utility service provider Eagle Plant became employee-owned after the founder chose the option as part of a business succession plan. The founder pointed to several criteria as playing a crucial role in the transition decision: “I wanted to maintain the culture of the business, I wanted to maintain the jobs within the business. These [issues] were all important things and I wanted to avoid a trade sale and management buyout … I didn’t like the idea of that because I felt a lot of management buyouts … start off very well, [then] people start thinking, ‘let’s cash in the chips, let’s get rich quick’, and so forth.”