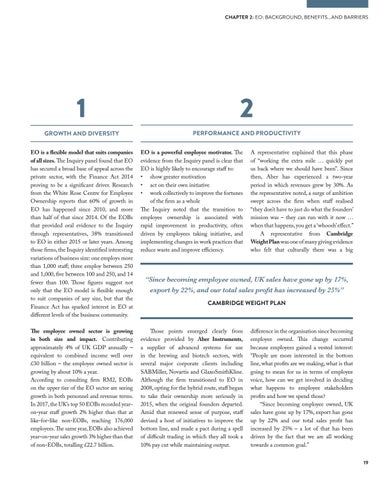 EO is a flexible model that suits companies of all sizes. The Inquiry panel found that EO has secured a broad base of appeal across the private sector, with the Finance Act 2014 proving to be a significant driver. Research from the White Rose Centre for Employee Ownership reports that 60% of growth in EO has happened since 2010, and more than half of that since 2014. Of the EOBs that provided oral evidence to the Inquiry through representatives, 38% transitioned to EO in either 2015 or later years. Among those firms, the Inquiry identified interesting variations of business size: one employs more than 1,000 staff; three employ between 250 and 1,000, five between 100 and 250, and 14 fewer than 100. Those figures suggest not only that the EO model is flexible enough to suit companies of any size, but that the Finance Act has sparked interest in EO at different levels of the business community.

EO is a powerful employee motivator. The evidence from the Inquiry panel is clear that EO is highly likely to encourage staff to: • show greater motivation • act on their own initiative • work collectively to improve the fortunes of the firm as a whole The Inquiry noted that the transition to employee ownership is associated with rapid improvement in productivity, often driven by employees taking initiative, and implementing changes in work practices that reduce waste and improve efficiency.

The employee owned sector is growing in both size and impact. Contributing approximately 4% of UK GDP annually – equivalent to combined income well over £30 billion – the employee owned sector is growing by about 10% a year. According to consulting firm RM2, EOBs on the upper tier of the EO sector are seeing growth in both personnel and revenue terms. In 2017, the UK’s top 50 EOBs recorded yearon-year staff growth 2% higher than that at like-for-like non-EOBs, reaching 176,000 employees. The same year, EOBs also achieved year-on-year sales growth 3% higher than that of non-EOBs, totalling £22.7 billion.

Those points emerged clearly from evidence provided by Aber Instruments, a supplier of advanced systems for use in the brewing and biotech sectors, with several major corporate clients including SABMiller, Novartis and GlaxoSmithKline. Although the firm transitioned to EO in 2008, opting for the hybrid route, staff began to take their ownership more seriously in 2015, when the original founders departed. Amid that renewed sense of purpose, staff devised a host of initiatives to improve the bottom line, and made a pact during a spell of difficult trading in which they all took a 10% pay cut while maintaining output.

A representative explained that this phase of “working the extra mile … quickly put us back where we should have been”. Since then, Aber has experienced a two-year period in which revenues grew by 30%. As the representative noted, a surge of ambition swept across the firm when staff realised “they don’t have to just do what the founders’ mission was – they can run with it now … when that happens, you get a ‘whoosh’ effect.” A representative from Cambridge Weight Plan was one of many giving evidence who felt that culturally there was a big

“Since becoming employee owned, UK sales have gone up by 17%, export by 22%, and our total sales profit has increased by 25%” CAMBRIDGE WEIGHT PLAN

difference in the organisation since becoming employee owned. This change occurred because employees gained a vested interest: “People are more interested in the bottom line, what profits are we making, what is that going to mean for us in terms of employee voice, how can we get involved in deciding what happens to employee stakeholders profits and how we spend those? “Since becoming employee owned, UK sales have gone up by 17%, export has gone up by 22% and our total sales profit has increased by 25% – a lot of that has been driven by the fact that we are all working towards a common goal.” 19