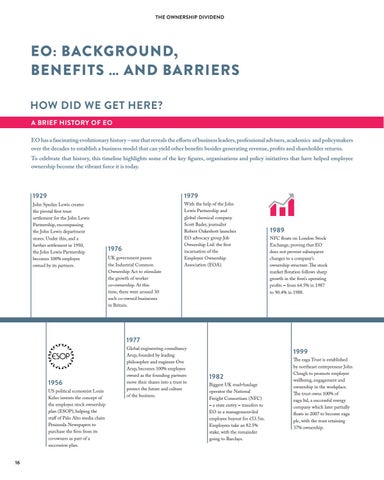 EO: BACKGROUND, BENEFITS … AND BARRIERS HOW DID WE GET HERE? A BRIEF HISTORY OF EO EO has a fascinating evolutionary history – one that reveals the efforts of business leaders, professional advisers, academics and policymakers over the decades to establish a business model that can yield other benefits besides generating revenue, profits and shareholder returns. To celebrate that history, this timeline highlights some of the key figures, organisations and policy initiatives that have helped employee ownership become the vibrant force it is today.

1976 UK government passes the Industrial Common Ownership Act to stimulate the growth of worker co-ownership. At this time, there were around 30 such co-owned businesses in Britain.

1989 NFC floats on London Stock Exchange, proving that EO does not prevent subsequent changes to a company’s ownership structure. The stock market flotation follows sharp growth in the firm’s operating profits – from 64.5% in 1987 to 90.4% in 1988.

1956 US political economist Louis Kelso invents the concept of the employee stock ownership plan (ESOP), helping the staff of Palo Alto media chain Peninsula Newspapers to purchase the firm from its co-owners as part of a succession plan.

Global engineering consultancy Arup, founded by leading philosopher and engineer Ove Arup, becomes 100% employee owned as the founding partners move their shares into a trust to protect the future and culture of the business.

1999 1982 Biggest UK road-haulage operator the National Freight Consortium (NFC) – a state entity – transfers to EO in a management-led employee buyout for £53.5m. Employees take an 82.5% stake, with the remainder going to Barclays.

The eaga Trust is established by northeast entrepreneur John Clough to promote employee wellbeing, engagement and ownership in the workplace. The trust owns 100% of eaga ltd, a successful energy company which later partially floats in 2007 to become eaga plc, with the trust retaining 37% ownership.