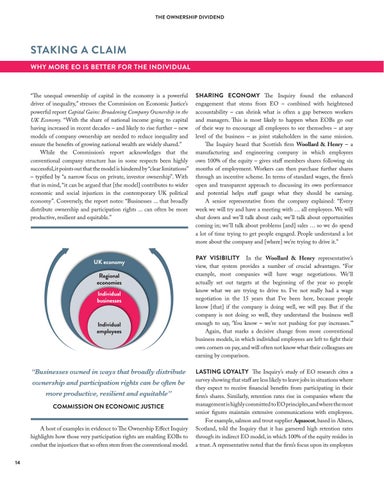 STAKING A CLAIM WHY MORE EO IS BETTER FOR THE INDIVIDUAL

“The unequal ownership of capital in the economy is a powerful driver of inequality,” stresses the Commission on Economic Justice’s powerful report Capital Gains: Broadening Company Ownership in the UK Economy. “With the share of national income going to capital having increased in recent decades – and likely to rise further – new models of company ownership are needed to reduce inequality and ensure the benefits of growing national wealth are widely shared.” While the Commission’s report acknowledges that the conventional company structure has in some respects been highly successful, it points out that the model is hindered by “clear limitations” – typified by “a narrow focus on private, investor ownership”. With that in mind, “it can be argued that [the model] contributes to wider economic and social injustices in the contemporary UK political economy”. Conversely, the report notes: “Businesses ... that broadly distribute ownership and participation rights ... can often be more productive, resilient and equitable.”

“Businesses owned in ways that broadly distribute ownership and participation rights can be often be more productive, resilient and equitable” COMMISSION ON ECONOMIC JUSTICE A host of examples in evidence to The Ownership Effect Inquiry highlights how those very participation rights are enabling EOBs to combat the injustices that so often stem from the conventional model. 14

SHARING ECONOMY The Inquiry found the enhanced engagement that stems from EO – combined with heightened accountability – can shrink what is often a gap between workers and managers. This is most likely to happen when EOBs go out of their way to encourage all employees to see themselves – at any level of the business – as joint stakeholders in the same mission. The Inquiry heard that Scottish firm Woollard &amp; Henry – a manufacturing and engineering company in which employees own 100% of the equity – gives staff members shares following six months of employment. Workers can then purchase further shares through an incentive scheme. In terms of standard wages, the firm’s open and transparent approach to discussing its own performance and potential helps staff gauge what they should be earning. A senior representative from the company explained: “Every week we will try and have a meeting with … all employees. We will shut down and we’ll talk about cash; we’ll talk about opportunities coming in; we’ll talk about problems [and] sales … so we do spend a lot of time trying to get people engaged. People understand a lot more about the company and [where] we’re trying to drive it.” PAY VISIBILITY In the Woollard &amp; Henry representative’s view, that system provides a number of crucial advantages. “For example, most companies will have wage negotiations. We’ll actually set out targets at the beginning of the year so people know what we are trying to drive to. I’ve not really had a wage negotiation in the 15 years that I’ve been here, because people know [that] if the company is doing well, we will pay. But if the company is not doing so well, they understand the business well enough to say, ‘You know – we’re not pushing for pay increases.’” Again, that marks a decisive change from more conventional business models, in which individual employees are left to fight their own corners on pay, and will often not know what their colleagues are earning by comparison. LASTING LOYALTY The Inquiry’s study of EO research cites a survey showing that staff are less likely to leave jobs in situations where they expect to receive financial benefits from participating in their firm’s shares. Similarly, retention rates rise in companies where the management is highly committed to EO principles, and where the most senior figures maintain extensive communications with employees. For example, salmon and trout supplier Aquascot, based in Alness, Scotland, told the Inquiry that it has garnered high retention rates through its indirect EO model, in which 100% of the equity resides in a trust. A representative noted that the firm’s focus upon its employees