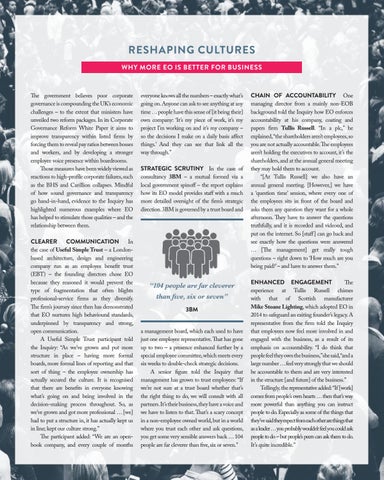 RESHAPING CULTURES WHY MORE EO IS BETTER FOR BUSINESS

The government believes poor corporate governance is compounding the UK’s economic challenges – to the extent that ministers have unveiled two reform packages. In its Corporate Governance Reform White Paper it aims to improve transparency within listed firms by forcing them to reveal pay ratios between bosses and workers, and by developing a stronger employee voice presence within boardrooms. Those measures have been widely viewed as reactions to high-profile corporate failures, such as the BHS and Carillion collapses. Mindful of how sound governance and transparency go hand-in-hand, evidence to the Inquiry has highlighted numerous examples where EO has helped to stimulate those qualities – and the relationship between them.

CLEARER COMMUNICATION In the case of Useful Simple Trust – a Londonbased architecture, design and engineering company run as an employee benefit trust (EBT) – the founding directors chose EO because they reasoned it would prevent the type of fragmentation that often blights professional-service firms as they diversify. The firm’s journey since then has demonstrated that EO nurtures high behavioural standards, underpinned by transparency and strong, open communication. A Useful Simple Trust participant told the Inquiry: “As we’ve grown and put more structure in place – having more formal boards, more formal lines of reporting and that sort of thing – the employee ownership has actually secured the culture. It is recognised that there are benefits in everyone knowing what’s going on and being involved in the decision-making process throughout. So, as we’ve grown and got more professional … [we] had to put a structure in, it has actually kept us in line; kept our culture strong.” The participant added: “We are an openbook company, and every couple of months

everyone knows all the numbers – exactly what’s going on. Anyone can ask to see anything at any time … people have this sense of [it being their] own company: ‘It’s my piece of work, it’s my project I’m working on and it’s my company – so the decisions I make on a daily basis affect things.’ And they can see that link all the way through.”

STRATEGIC SCRUTINY In the case of consultancy 3BM – a mutual formed via a local government spinoff – the report explains how its EO model provides staff with a much more detailed oversight of the firm’s strategic direction. 3BM is governed by a trust board and

“104 people are far cleverer than five, six or seven” 3BM a management board, which each used to have just one employee representative. That has gone up to two – a presence enhanced further by a special employee committee, which meets every six weeks to double-check strategic decisions. A senior figure told the Inquiry that management has grown to trust employees: “If we’re not sure at a trust board whether that’s the right thing to do, we will consult with all partners. It’s their business, they have a voice and we have to listen to that. That’s a scary concept in a non-employee owned world, but in a world where you trust each other and ask questions, you get some very sensible answers back … 104 people are far cleverer than five, six or seven.”

CHAIN OF ACCOUNTABILITY One managing director from a mainly non-EOB background told the Inquiry how EO enforces accountability at his company, coating and papers firm Tullis Russell. “In a plc,” he explained, “the shareholders aren’t employees, so you are not actually accountable. The employees aren’t holding the executives to account, it’s the shareholders, and at the annual general meeting they may hold them to account. “[At Tullis Russell] we also have an annual general meeting. [However,] we have a ‘question time’ session, where every one of the employees sits in front of the board and asks them any question they want for a whole afternoon. They have to answer the questions truthfully, and it is recorded and videoed, and put on the internet. So [staff ] can go back and see exactly how the questions were answered … [The management] get really tough questions – right down to ‘How much are you being paid?’ – and have to answer them.” ENHANCED ENGAGEMENT The experience at Tullis Russell chimes with that of Scottish manufacturer Mike Stoane Lighting, which adopted EO in 2014 to safeguard an exiting founder’s legacy. A representative from the firm told the Inquiry that employees now feel more involved in and engaged with the business, as a result of its emphasis on accountability. “I do think that people feel they own the business,”she said,“and a large number … feel very strongly that we should be accountable to them and are very interested in the structure [and future] of the business.” Tellingly, the representative added: “If [work] comes from people’s own hearts … then that’s way more powerful than anything you can instruct people to do. Especially as some of the things that they’ve said they expect from each other are things that as a leader …you probably wouldn’t feel you could ask people to do – but people’s peers can ask them to do. It’s quite incredible.” 13