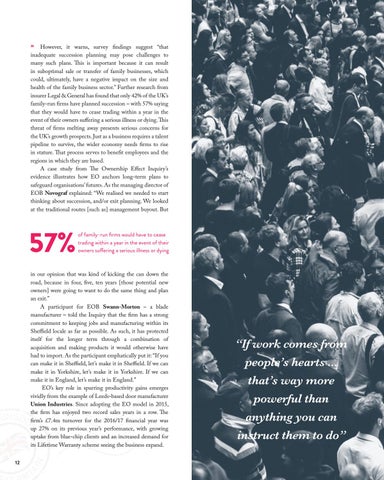 » However, it warns, survey findings suggest “that inadequate succession planning may pose challenges to many such plans. This is important because it can result in suboptimal sale or transfer of family businesses, which could, ultimately, have a negative impact on the size and health of the family business sector.” Further research from insurer Legal & General has found that only 42% of the UK’s family-run firms have planned succession – with 57% saying that they would have to cease trading within a year in the event of their owners suffering a serious illness or dying. This threat of firms melting away presents serious concerns for the UK’s growth prospects. Just as a business requires a talent pipeline to survive, the wider economy needs firms to rise in stature. That process serves to benefit employees and the regions in which they are based. A case study from The Ownership Effect Inquiry’s evidence illustrates how EO anchors long-term plans to safeguard organisations’ futures. As the managing director of EOB Novograf explained: “We realised we needed to start thinking about succession, and/or exit planning. We looked at the traditional routes [such as] management buyout. But

in our opinion that was kind of kicking the can down the road, because in four, five, ten years [those potential new owners] were going to want to do the same thing and plan an exit.” A participant for EOB Swann-Morton – a blade manufacturer – told the Inquiry that the firm has a strong commitment to keeping jobs and manufacturing within its Sheffield locale as far as possible. As such, it has protected itself for the longer term through a combination of acquisition and making products it would otherwise have had to import. As the participant emphatically put it: “If you can make it in Sheffield, let’s make it in Sheffield. If we can make it in Yorkshire, let’s make it in Yorkshire. If we can make it in England, let’s make it in England.” EO’s key role in spurring productivity gains emerges vividly from the example of Leeds-based door manufacturer Union Industries. Since adopting the EO model in 2015, the firm has enjoyed two record sales years in a row. The firm’s £7.4m turnover for the 2016/17 financial year was up 27% on its previous year’s performance, with growing uptake from blue-chip clients and an increased demand for its Lifetime Warranty scheme seeing the business expand. 12

“If work comes from people’s hearts ... that’s way more powerful than anything you can instruct them to do”